Politics and Pasta: How I Prosecuted Mobsters, Rebuilt a Dying City, Dined with Sinatra, Spent Five Years in a Federally Funded (Hardcover) 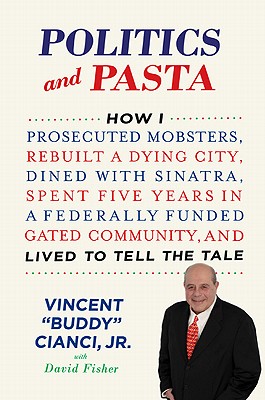 Politics and Pasta: How I Prosecuted Mobsters, Rebuilt a Dying City, Dined with Sinatra, Spent Five Years in a Federally Funded (Hardcover)

An election is a war and "to the victor belongs the spoils."  As I learned so well, that's the real democratic process.  After all, you'll never see a victorious politician tell his supporters, "I want to thank all of you who worked so hard for my election.  However, in the interest of good government, I've decided to give all the jobs to those people who voted against me."     My name is Buddy Cianci.  I spent almost three decades as mayor of Providence...before leaving for an enforced vacation in a federally funded gated community.     When I first took office, Providence was a dying industrial city, and I helped turn it into one of the most desirable places to  live in America.  I did it by playing the game of hardball politics as well as it has ever been played.  My favorite Frank Sinatra lyric is "I did it my way," because that's the only way a mayor can run a city.  As I used to tell my staff, "When you spend your weekends kissing elderly women with mustaches, you can make the decisions."     If you want to know the truth about how politics is played, you picked the right book.  This is the behind-the-locked-door story of how politics in America really works.  It's take me a lifetime of successes and failures to write it.  It's all in these pages.  I have been called many things in my career: I've been "America's Most Innovative Mayor," a "colorful character," and a convicted felon.  But no one has ever called me shy.

VINCENT "BUDDY" CIANCI, JR. is a former prosecutor and Mayor of Providence. As mayor he was credited with turning the city around and making it a destination. He's presently one of the top radio talk show hosts in New England on 630 WPRO AM and 99.7 FM, chief political analyst for WLNE-ABC Channel 6, and host of the weekly TV talk show "News on the Record." DAVID FISHER is the author of more than fifteen "New York Times "bestsellers. He lives in New York.

"Look up controversial in the dictionary and Buddy Cianci's picture will be there. As he is happy to tell you, he never backed down from a fight or a challenge while rebuilding a great city, and he'll make you laugh while doing it."--Sean Hannity

"It's pure Buddy. Beguiling, hilarious, with an excuse -- and a joke -- for everything, Cianci shows why he's one of the most storied figures in modern urban politics. ... It delivers all those things, plus a guided tour of a fascinating political mind."--Politico "Politics and Pasta is a compulsively readable — if not entirely candid — insider's account of city politics by one of the most colorful and longest-serving mayors in memory. And it's written by, as Cianci puts it, perhaps the only person who has ever been inside the White House, Windsor Castle and the federal penitentiary at Fort Dix in New Jersey."--The Associated Press "Cianci tells the fascinating story of his rise to power and the profound transformation that Providence underwent under his command.... As colorful on the page as he is in person, Cianci is a natural storyteller with a lot to say."--Kirkus Reviews "A relentless charmer.... A shrewd intelligence shines through; it's easy to understand why he kept getting re-elected. Cianci readily admits to the role luck and money played in his success, and even admits to some major mistakes. More subtly, the former mayor reveals the intricacies of the horse-trading that makes politics go."--Publishers Weekly "It's an incredible read. I honestly couldn't put it down. Parts of his life read like a movie. You will be amazed at how honest Cianci is at points, and you'll laugh out loud at other points. The guy is candid. He's funny. What else can I say? He's Buddy."--South Coast Today "Cianci is a character, a one-of-kind, bigger than life politican the likes of which I have never met before. I find it difficult to even think of anyone I could come close to comparing him to -- he's that unique."--Norwich Bulletin