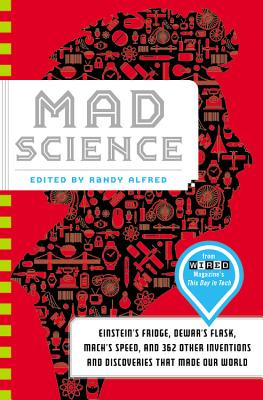 365 days of inventions, discoveries, science, and technology, from the editors of Wired Magazine.

On January 30, Rubik applied for a patent on his cube (1975). On the next day, 17 years earlier, the first U.S. Satellite passed through the Van Allen radiation belt. On March 17, the airplane "black box" made its maiden voyage (1953). And what about today? Every day of the year has a rich scientific and technological heritage just waiting to be uncovered, and Wired's top-flight science-trivia book Mad Science collects them chronologically, from New Year's Day to year's end, showing just how entertaining, wonderful, bizarre, and relevant science can be.

In 2010, Wired's popular "This Day in Tech" blog peaked with more than 700,000 page views each month, and one story in 2008 drew more than a million unique viewers. This book will collect the most intriguing anecdotes from the blog's run-one for each day of the year-and publish them in a package that will instantly appeal to hardcore techies and curious laypeople alike.

Randy Alfred is Editor of "This Day in Tech." He joined Wired.com as a copy editor in 2007. He also worked as senior news writer at Paul Allen's Tech TV cable channel. He lives in San Francisco.

"Pure delight. Where else do baseball, birth control and postage stamps come together? Mad Science follows the thread of science and technology through the fabric of our everyday lives." -- Richard Hart, Next Step TV, Technology Journalist
—-