I Crawl Through It (Paperback) 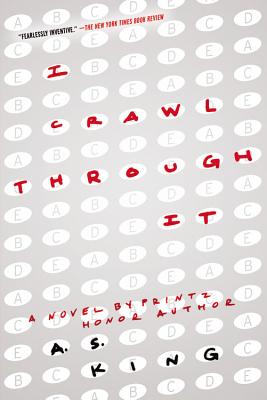 I Crawl Through It (Paperback)


We can usually get this book in 3 to 7 days, except during a pandemic. We are doing our best
Four teenagers are on the verge of exploding. The anxieties they face at every turn have nearly pushed them to the point of surrender: senseless high-stakes testing, the lingering damage of past trauma, the buried grief and guilt of tragic loss. They are desperate to cope, but no one is listening.

So they will lie. They will split in two. They will turn inside out. They will even build an invisible helicopter to fly themselves far away...but nothing releases the pressure. Because, as they discover, the only way to truly escape their world is to fly right into it.

The genius of acclaimed author A.S. King reaches new heights in this groundbreaking work of surrealist fiction; it will mesmerize readers with its deeply affecting exploration of how we crawl through traumatic experience--and find the way out.

A.S. King has been called “One of the best Y.A. writers working today” by the New York Times Book Review and is a recipient of the Margaret A. Edwards Award for lifetime achievement in writing for young adults. King is the author of novels including the 2020 Michael L. Printz Award-winning Dig.,Glory O'Brien's History of the Future, the 2013 Los Angeles Times Book Prize winner Ask the Passengers, and 2011 Printz Honor Book Please Ignore Vera Dietz, among others. Her most recent release, Switch, has been called "a work of literary genius" by Booklist. She is a faculty member at Vermont College of Fine Arts and spends many months of the year traveling the country speaking to high school students about trauma, emotions, and red velvet cake. After many years living self-sufficiently and teaching literacy to adults in Ireland, she now lives in Pennsylvania. Find more at www.as-king.com.

Praise for I Crawl Through It: A Booklist Editor's Choice Book of 2015
A Booklist Top 50 YA Audiobook Novels of All Time

"I Crawl Through It proves that A.S. King is one of the most innovative and talented novelists of our time. This is King's masterpiece--a brilliant, paranoid, poetic, funny, and at times overwhelmingly sad literary cocktail of absinthe and Adderall. What a trip!"—Andrew Smith, acclaimed author of Winger and Grasshopper Jungle

* "At once a statement on the culture of modern schools as well as mental health issues, this novel is an ambitious, haunting work of art."
—School Library Journal, starred review

*"Masterfully written and brilliantly bizarre, this is King at her most innovative yet."
—VOYA, starred review

*"King's novel blends the magical and the mundane in a deadpan delivery
that makes it difficult to tell one from the other. This, of course, is
the point of her ambitious and affecting work."
—The Horn Book, starred review

*"It's bizarre, compelling, and not like anything else."
—Publishers Weekly, starred review

"A meditation on grief, guilt, and survival.... Readers [will be] rewarded with the self-actualization of finely wrought characters.... Absolutely worthwhile."
—Kirkus Reviews