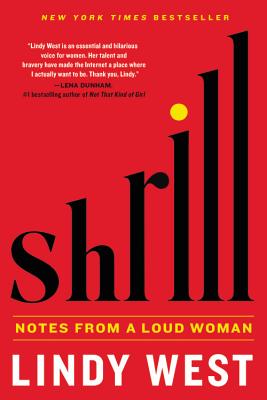 
Backordered. There will likely be a delay in getting this book
Shrill is an uproarious memoir, a feminist rallying cry in a world that thinks gender politics are tedious and that women, especially feminists, can't be funny.

Coming of age in a culture that demands women be as small, quiet, and compliant as possible -- like a porcelain dove that will also have sex with you -- writer and humoristLindy West quickly discovered that she was anything but.

From a painfully shy childhood in which she tried, unsuccessfully, to hide her big body and even bigger opinions; to her public war with stand-up comedians over rape jokes; to her struggle to convince herself, and then the world, that fat people have value; to her accidental activism and never-ending battle royale with Internet trolls, Lindy narrates her life with a blend of humor and pathos that manages to make a trip to the abortion clinic funny and wring tears out of a story about diarrhea.

With inimitable good humor, vulnerability, and boundless charm, Lindy boldly shares how to survive in a world where not all stories are created equal and not all bodies are treated with equal respect, and how to weather hatred, loneliness, harassment, and loss, and walk away laughing. Shrill provocatively dissects what it means to become self-aware the hard way, to go from wanting to be silent and invisible to earning a living defending the silenced in all caps.
Lindy West is a contributing opinion writer for the New York Times. She is the bestselling author of Shrill, a memoir which has been adapted into a Hulu series starring Aidy Bryant, and a forthcoming book entitled The Witches Are Coming. She lives in Seattle.
"Lindy West's memoir is a witty and cathartic take on toxic misogyny and fat shaming. She comes to accept her body just as Internet trolls congregate en masse to try to rip this new confidence from her, but she's rearing to fight back...In Shrill, West is our fat, ferocious, and funny avenging angel."—NPR, Best Books of 2016

"Lindy West is an essential (and hilarious) voice for women. Her talent and bravery have made the Internet a place I actually want to be. Thank you, Lindy."—Lena Dunham, #1 bestselling author of Not That Kind of Girl

"Hey reader! I thought I'd read enough in this lifetime about people's childhoods and feelings and such and I'd never want to do it again. But Lindy West is such a totally entertaining and original writer she kind of blew that thought out of my head halfway into the first chapter. I dare you to feel differently."—Ira Glass, This American Life

"It's literally the new Bible."—Caitlin Moran, bestselling author of How to Be a Woman

"One of the most distinctive voices advancing feminist politics through
humor...With patience, humor and a wildly generous attitude toward her
audience [West] meets readers at their point of prejudice so that she
may, with little visible effort, shepherd them toward a more humane
point of view."—The New York Times Book Review

"Lindy
West is funny. That's the first thing you should know about her essay
collection on feminism, fat acceptance, and Internet harassment....Lindy has
faced so many intolerable and enraging situations as a fat woman who is
outspoken in her writing and on social media, but she always frames her
negative experiences with humor and perspective. With her clear-eyed insights
into modern culture and her confidence in her own intelligence and personal
worth, West appeals to the humanity of even the most parents' basement-dwelling,
misogynistic and casually hateful of trolls."—Esquire, Best Books of 2016

"There's a reason Lindy West is such a beloved writer: she gets to the heart of impossible issues with humor and grace. West will have you cringing, laughing and crying, all within one page. Shrill is a must-read for all women."—Jessica Valenti, author of Why Have Kids and Full Frontal Feminism

"The surge of love and joy I felt while crylaughing through this book almost made my cold dead heart explode. Lindy is so smart and so funny that it almost hurts my little jealous-ass feelings. She is my most favorite writer ever."—Samantha Irby, author of Meaty

"Ask West one question, and the feminist writer and film critic's answer feels like wandering into an extraordinarily engaging women's studies class taught by your favorite comedian. West pings back and forth between astute commentary about the role of women in society to clever asides on the idiocy of trolls to riotous observations about life on the Internet."—Cosmopolitan

"Lindy West has written a really funny, insightful book that you all should buy. I would recommend reading it, too."—Andy Richter

"She's candid and funny, unafraid to criticize rape jokes or explain how airline discriminate against fat people, and her fearlessness has made her one of the most notable voices on the Internet."—Flavorwire

"Lindy West can take almost any topic and write about it in a way that is smart, funny, warm, and unique."—Bustle

"In Shrill...West is utterly candid and totally hilarious....She's also quite moving...In an age in which Internet umbrage is almost as rampant as Internet trolling, West, as funny as she is incisive, distinguishes herself as a writer who cuts to the heart of the matter. Shrill is no exception."—Vogue.com

"One of the most impressive aspects of this book is the level of nuance, self-reflection, and humanity that West displays in her analysis of her own writing and her relationships with others.... She shows that you can be funny and mean and incisive and brilliant, and you can also be thoughtful and considerate and write with intention....Throughout, West proves herself to be a considerate and critical narrator with equal capacity for humor and genuine reflection-a writer who can turn her analytical eye just as easily to society as to her own life. It's the best kind of memoir, and it shows that Lindy West still has a lot more to say-and that we should all keep listening."—Bitch Media

"Lindy West did not set out to be a feminist warrior against the forces that wish to silence and hurt women for doing things that men take for granted...Someone has to fight the misogynists, after all, and West is well-situated for the front lines, lacing her blunt sense of humor with a surprising amount of nuanced empathy, even for those out there who are the ugliest to women."—Salon

"From her early stories to the hot-off-the-press pages of Shrill, there is one ever-present, never exhausted hallmark of West's writing, and that is its unwavering heart. Whether she's writing about being fat-shamed by a stranger or confronting the troll who posed online as her recently deceased father, West has a way of wringing empathy and catharsis out of even the most deplorable circumstances. Reading her book is like taking a master class in inclusivity and cultural criticism, as taught by one of the funniest feminists alive today."—Refinery29

"Uproariously funny...Readers will delight in West's biting clarity....Despite its serious subject, West's ribald jokes, hilarious tirades, and raucous confessions keep her memoir skipping merrily along as she jumps from painful confession to powerful epiphany. Sure to be a boon for anyone who has struggled with body image, Shrill is a triumphant, exacting, absorbing memoir that will lay new groundwork for the way we talk about the taboo of being too large."—Booklist (Starred Review)

"There's some beautiful, joyful writing here: West defies cliches both by being persistently hilarious and deeply loving.....In the same way that West traces the sobering long-term consequences of fighting over big cultural issues in public, she also writes with substance and grace about living in her own body in a way that transcends the sometimes facile cheerleading for body positivity that shows up everywhere, from feminist Tumblrs to the cover of Sports Illustrated's swimsuit issue.....It's not easy to talk about the work and consequences involved in changing the world; we crave triumphal stories and incidents to get outraged by. The strength of "Shrill," though, is the way it captures both halves of the equation, the joy of those hard-fought victories and the pain incurred in battle."—Washington Post

"Read her ferociously funny book and you'll be shouting her praises."—People

"Lindy
West stares defiantly into the eyes of anyone who reaches to pick it up and
dares them not to shed any sexism they might harbor, whether conscious or
not...Her writing is sharp, smart, hilarious, relatable, insightful and
memorable. She tackles serious and personal subjects-like being fat, getting an
abortion, feeling lonely or dealing with harassment online-and is just as
capable of eliciting tears as laughter. The combination is part of what makes
her voice so effective and absorbing....I dare you to pick up a copy."—Newsweek, Best Books of 2016

"Both sharp-toothed and fluid....To see so much of West's writing in one
place is to appreciate her range. She can eviscerate the status quo
with raunchy humor....She can attack entrenched sexism with skilled
polemic....And she can leave both of those modes behind to write
poignantly about growing up, losing her father, and falling in
love....West is propulsively entertaining."—Slate

"Lindy West's debut book, Shrill, is an emotional rollercoaster. One moment you're snorting from laughter, trying to avoid all the weird looks you're getting on the train. The next you're silently absorbing a larger truth neatly packaged into the perfect sentence you didn't expect to read."—Mother Jones

"In her incredible and insightful new book Shrill....West gets unflinchingly real about growing up fat and the harmful impact that the media (and its disdain for fat women) can have on young girls....what West ultimately strives for is to incrementally make those small changes that can lead to something so much bigger and better for us all."—Amy Poehler's Smart Girls

"[Lindy is] warm and cutting, vulnerable, and funny in equal measures; her sense of self makes you yourself feel seen."—Buzzfeed

"This is who Lindy West is: A constantly harangued feminist writer ready to transmute your BS into comedy....you need to read [Shrill]. It's hilarious, biting and wise."—The Huffington Post

"West came of age as a writer in the full light of the Internet, a young
feminist speaking out against fat-shaming--publicly addressing her
colleague at the Stranger, Dan Savage--and writing about periods and
rape jokes at Jezebel the Guardian....[reveals] how vital it is for young women to raise their voices."—Los Angeles Times, The 10 Most Important Books of 2016

"A compilation of powerful and brave essays about coming-of-age in a world that's set on silencing girls and women."—Revelist

"Lindy
West is one of the Great Ladies of the Feminist Internet, her writing style
alone setting a regal standard for many of us coming of age in these wild
online times....250 pages of pure hilariousness...West writes
about both the trap of living in a body and identity that is marginalized, but
also the power we have to reclaim these identities by being wholly,
indefatigably, and - wait for it - shrilly ourselves."—Feministing.com

"You have to be careful about what you read when you're
writing, or you can end up in total despair, thinking, 'This is what I wanted
to say, only she got there first and said it better.'"—Jennifer Weiner, #1 New York Times bestselling author of Good in Bed and The Littlest Bigfoot

"Lindy West's name may already be familiar to readers of Jezebel or to anyone who listened to her fascinating, brutal piece on internet trolls for This American Life. Her collection of essays takes on stereotypes, gender politics, beauty standards and other topics she attacks with her thoughtful, clever, cutting and inspiring commentary."—Minnesota Public Radio, Best Books of 2016