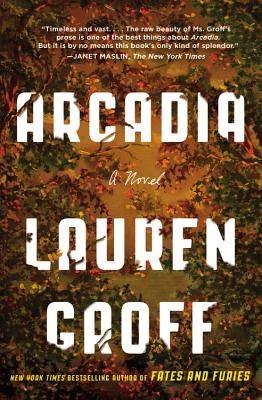 “I am left almost speechless by the beauty and raw reality of this book. The story is centered around a boy named Bit -- nicknamed for his small size. Groff splits the narrative into two parts: in the first, we watch Bit grow up in a utopian wooded commune in the early '70s; in the next part, Bit is an adult, a father raising his own child in New York City. Grofff's wonderful use of language brings us into Bit's world -- the intimacy, wonder, confusion, worry, and unwavering hope he holds as a child and the struggle, shattering grief, and quiet determined bravery he develops as a man. Stunning!”
— Susan McCloskey, Bookshop Santa Cruz, Santa Cruz, CA

A staggering portrait of a crumbling utopia, this "timeless and vast" novel filled with the "raw beauty" beautifully depicts an idyllic commune in New York State -- and charts its eventual yet inevitable downfall (Janet Maslin, The New York Times).
NEW YORK TIMES BESTSELLER

"Timeless and vast... The raw beauty of Ms. Groff's prose is one of the best things about Arcadia. But it is by no means this book's only kind of splendor."---Janet Maslin, The New York Times

"Even the most incidental details vibrate with life Arcadia wends a harrowing path back to a fragile, lovely place you can believe in."---Ron Charles, The Washington Post

In the fields of western New York State in the 1970s, a few dozen idealists set out to live off the land, founding a commune centered on the grounds of a decaying mansion called Arcadia House. Arcadia follows this romantic utopian dream from its hopeful start through its heyday. Arcadia's inhabitants include Handy, the charismatic leader; his wife, Astrid, a midwife; Abe, a master carpenter; Hannah, a baker and historian; and Abe and Hannah's only child, Bit. While Arcadia rises and falls, Bit, too, ages and changes. He falls in love with Helle, Handy's lovely, troubled daughter. And eventually he must face the world beyond Arcadia.

In Arcadia, Groff displays her literary gifts to stunning effect.

"It's not possible to write any better without showing off."---Richard Russo, author of the Pulitzer Prize-winning novel Empire Falls

"Dazzling."---Vogue
Lauren Groff is the author of The Monsters of Templeton, shortlisted for the Orange Prize for New Writers; Arcadia, a New York Times Notable Book, winner of the Medici Book Club Prize, and finalist for the L.A. Times Book Award; and Fates and Furies, a National Book Award finalist. Her writing has appeared in the New Yorker, the Atlantic Monthly, Harper's, Tin House, One Story, McSweeney's, and Ploughshares, and in the anthologies 100 Years of the Best American Short Stories, The Pushcart Prize: Best of the Small Presses, PEN/O. Henry Prize Stories, and three editions of The Best American Short Stories. She lives in Gainesville, Florida, with her husband and two sons.
"[Lauren Groff] has taken a quaint, easily caricatured community and given it true universality . . . And a book that might have been small, dated and insular winds up feeling timeless and vast. The raw beauty of Ms. Groff's prose is one of the best things about "Arcadia." But it is by no means this book's only kind of splendor."—Janet Maslin, The New York Times

"Lauren Groff's first book was a wonder and a delight What a happy relief to discover Groff's second novel is even better [than The Monsters of Templeton]. Not every young writer lives up to the promise of a first book, but Groff has exceeded expectations. Riveting."—Miami Herald

"[A] beautifully crafted novel Groff's second novel, after the well-received The Monsters of Templeton (2008), gives full rein to her formidable descriptive powers, as she summons both the beauty of striving for perfection and the inevitable devastation of failing so miserably to achieve it."—Booklist (Starred Review)

"I was constantly torn between wanting to gulp down this book or savor its lines. Even the most incidental details vibrate with life. . . . Groff's miracle is to record the death of the fantasy but then show how the residue of affection can persist and, given the right soil, sprout again. Arcadia wends a harrowing path back to a fragile, lovely place you can believe in."—Ron Charles, The Washington Post

"Richly peopled and ambitious and oh, so lovely, Lauren Groff's Arcadia is one of the most moving and satisfying novels I've read in a long time. It's not possible to write any better without showing off."—Richard Russo, author of the novel That Old Cape Magic and the Pulitzer Prize-winning Empire Falls

"Part Stone Diaries, part Lord of the Flies, part something out of a Shakespearean tragedy, Lauren Groff's Arcadia is so uniquely absorbing that you finish it as if waking from a dream. Groff is one of our most talented writers, and Arcadia one of the most revelatory, magical, and ambitious novels I've read in years."—Kate Walbert, author of the New York Times bestselling novel A Short History of Women

"Arcadia feels true, as do the characters who populate this extraordinary novel, which lingers on passing moments in time and highlights the importance of place in preserving not only our memories, but also ourselves."—Hannah Tinti, author of the bestselling and award-winning novel The Good Thief

"Lauren Groff's honed prose dazzles. With Arcadia, Groff has crafted a fresh novel out of an old literary theme - you can't go home again - by focusing on a protagonist who never stops trying to do so."—Dallas Morning News

"Arcadia builds its power in a subtle cumulative way. Somehow the author manages an epic sweep with her narrative, yet one that also feels intimate and concentrated [Groff] offers an ending that's both tragic and hopeful..."—Newsday

"A moving look at the value of human connection in a scary, chaotic world."—Entertainment Weekly

"An astonishing novel, both in ambition and achievement, filled with revelations that appear inevitable in retrospect, amid the cycle of life and death . A novel of "the invisible tissue of civilization," of "community or freedom," and of the precious fragility of lives in the balance."—Kirkus (Starred Review)