Tintin on the Moon: Destination Moon & Explorers on the Moon (The Adventures of Tintin) (Hardcover) 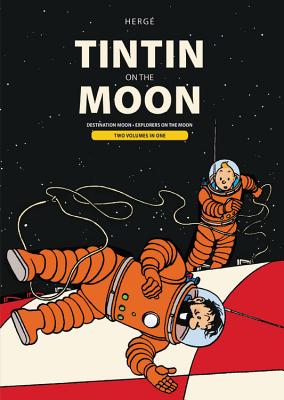 Tintin on the Moon: Destination Moon & Explorers on the Moon (The Adventures of Tintin) (Hardcover)


We can usually get this book in 3 to 7 days, except during a pandemic. We are doing our best
Celebrate Tintin's 90th anniversary and the 50th anniversary of the moon landing in this stellar volume including Destination Moon and Explorers on the Moon. This is the first time these two stories have been collected together in an oversized, luxe hardcover edition that features a stunning new cover and lavish silver spine.
Sixteen years before the first man walked on the moon, Tintin arrived at the satellite's secret space station to do some galactic detective work.
Destination Moon:Tintin, the world's most famous traveling reporter discovers that Professor Calculus is building a space rocket. Tintin and Captain Haddock are amazed to find that Professor Calculus is planning a top-secret project from the Sprodj Atomic Research Centre in Syldavia. And before our intrepid hero knows it, the next stop on this adventure is...space.
Explorers on the Moon:Following on from the events of Destination Moon, Tintin finds himself in a rocket on a collision course with the moon. And with Snowy the dog, Captain Haddock, Professor Calculus and the Thompson twins aboard, things quickly spiral further and further out of control.
Have you collected all of Tintin's adventures?Tintin and Alph-ArtTintin in AmericaTintin in the Land of the SovietsTintin and the PicarosTintin in TibetTintin: The Black IslandTintin: The Blue LotusTintin: The Broken EarTintin: The Calculus AffairTintin: The Castafiore EmeraldTintin: Cigars of the PharaohTintin: The Crab with the Golden ClawsTintin: Destination MoonTintin: Explorers of the MoonTintin: Flight 714 to SydneyTintin: King Ottakar's SceptreTintin: Land of Black GoldTintin: Prisoners of the SunTintin: Red Rackham's TreasureTintin: The Red Sea SharksTintin: The Secret of the UnicornTintin: The Seven Crystal BallsTintin: The Shooting Star
Hergé, one of the most famous Belgians in the world, was a comics writer and artist. The internationally successful Adventures of Tintin are his most well-known and beloved works. They have been translated into 38 different languages and have inspired such legends as Andy Warhol and Roy Lichtenstein. He wrote and illustrated for The Adventures of Tintin until his death in 1983.