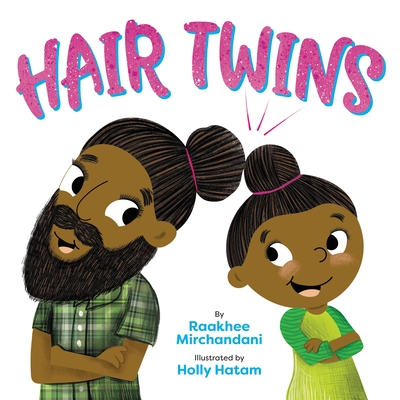 A Sikh father and daughter with a special hair bond proudly celebrate and share a family tradition in this charming story perfect for fans of Hair Love and I Love My Hair!

Every morning Papa combs through his daughter's waves like he does his own—parting it down the middle, using coconut oil to get all the tangles out.

Some days he braids her hair in two twists down the side of her face. Other days he weaves it into one long braid hanging down her back, just like a unicorn tail.  But her favorite style is when he combs her hair in a tight bun on the top of her head, just like the joora he wears every day under his turban. They call this their hair twin look!
Raakhee Mirchandani is an award-winning writer and editor and the author of Super Satya Saves the Day. When she isn't writing, Raakhee is either organizing her book shelves, running races to raise money for kids with cancer, or styling her very curly hair with new oils and potions. She lives in Hoboken, New Jersey, with her husband and daughter, the inspiration for Hair Twins. She invites you to follow her on Twitter @Raakstar and on Instagram @RaakstarWrites.

Holly Hatam is the illustrator of the #1 New York Times bestselling Dear Girl and Dear Boy, as well as Unicorns Are Real, Made by Maxine, and Jack (Not Jackie). She loves hugging trees, drinking tea, sniffing books, music, animations and most importantly, unicorns. She invites you to be transported into her magical world by visiting hollyhatam.com.

*“A feel-good picture book about diversity, family relationships, and self-love.”

*“Digitally collaged illustrations in a colorful cartoon style by Hatam spotlight a cast with a range of abilities, hair textures, religions, and skin tones. A sweet read that epitomizes a compassionate bond between parent and child.”

"A loving portrayal of a father-daughter bond that is strengthened over daily hair care, something that honors the characters’ religion while nurturing their relationship."