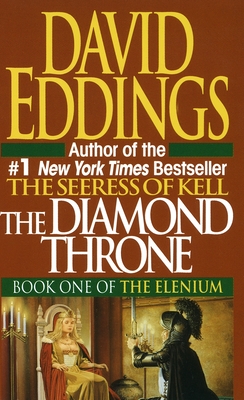 This is book number 1 in the The Elenium series.

From the #1 New York Times bestselling author of the Belegariad and Mallorean series comes the first novel in a series imbued with magic and adventure.

Sparhawk, Pandion Knight and Queen’s Champion, returned to Elenia after ten years of exile, only to find his young Queen Ehlana trapped in a block of ensorcelled crystal. Only the great sorcery of Sephrenia, ageless instructor of magic, kept her alive—but the spell would last only a year, and its cost was tragically high.

Now a Prince Regent ruled Elenia, the puppet of Annias, ambitious Primate of the Church who planned to seize power over all the land.

As Sparhawk and Sephrenia set out to find a cure for Ehlana, Sephrenia revealed that there was only one person in the west who could defeat the evil plots against Ehlana. That person was Sparhawk.
David Eddings (1931-2009) published his first novel, High Hunt, in 1973, before turning to the field of fantasy with the Belgariad, soon followed by the Malloreon. Born in Spokane, Washington, and raised in the Puget Sound area north of Seattle, he received his bachelor of arts degree from Reed College in Portland, Oregon, in 1954, and a master of arts degree from the University of Washington in 1961. He served in the US Army, worked as a buyer for the Boeing Company, and was both a grocery clerk and a college English teacher. He lived in Nevada until his death, at the age of 77.