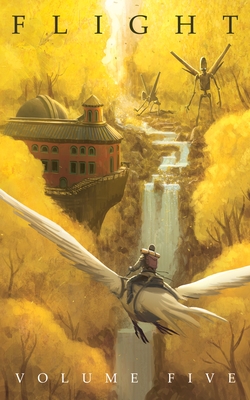 This is book number 5 in the Flight series.

STORIES BY
JP Ahonen
Graham Annable
Chris Appelhans
Bannister
Matthew Bernier
Scott Campbell
Svetlana Chmakova
Tony Cliff
Phil Craven
Michel Gagné
Kazu Kibuishi
Kness
Sonny Liew
Reagan Lodge
Made
John Martz
Sarah Mensinga
Ryan North
Richard Pose
Paul Rivoche
Dave Roman
Kean Soo
Joey Weiser
Kazu Kibuishi was 24 years old and working full-time in the animation industry when he began developing the idea of doing Flight. He began contacting his friends in the animation, comics, and graphic novel world to see if they would want to join the project. He now works from his home studio in Pasadena, California, creating and promoting Flight and his popular young adult comic Daisy Kutter, which was nominated as an American Library Association Best Book for Young Adults—the only graphic novel on the list in 2005.
“Regardless of where it’s shelved, this book belongs in every library.”
–Library Journal, on Flight: Volume One

“Sumptuously produced . . . The emphasis on the visual is Flight’s most notable strength.”
–Booklist, on Flight: Volume Three