Crime of Privilege: A Novel (Paperback) 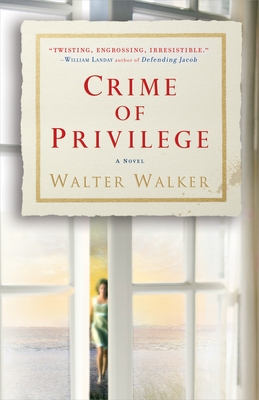 Crime of Privilege: A Novel (Paperback)

“This terrific thriller about a young Cape Cod lawyer ensnared in the political machinations of those in power will bring to mind the best of Scott Turow and John Grisham. Nuanced and subtle, this engrossing page turner takes on themes of guilt, social class and responsibility while remaining 'unputdownable'. It is action-packed and exciting as well as being an intimate reflection on the sin of omission and the ways that our inaction can haunt us and color our lives. Thought-provoking but also great fun, I highly recommend it, especially to readers of Defending Jacob”
— Tova Beiser, Brown University Bookstore, Providence, RI

In the tradition of Scott Turow, William Landay, and Nelson DeMille, Crime of Privilege is a stunning thriller about power, corruption, and the law in America—and the dangerous ways they come together.

A murder on Cape Cod. A rape in Palm Beach.

All they have in common is the presence of one of America’s most beloved and influential families. But nobody is asking questions. Not the police. Not the prosecutors. And certainly not George Becket, a young lawyer toiling away in the basement of the Cape & Islands district attorney’s office. George has always lived at the edge of power. He wasn’t born to privilege, but he understands how it works and has benefitted from it in ways he doesn’t like to admit. Now, an investigation brings him deep inside the world of the truly wealthy—and shows him what a perilous place it is.

Years have passed since a young woman was found brutally slain at an exclusive Cape Cod golf club, and no one has ever been charged. Cornered by the victim’s father, George can’t explain why certain leads were never explored—leads that point in the direction of a single family—and he agrees to look into it.

What begins as a search through the highly stratified layers of Cape Cod society, soon has George racing from Idaho to Hawaii, Costa Rica to France to New York City. But everywhere he goes he discovers people like himself: people with more secrets than answers, people haunted by a decision years past to trade silence for protection from life’s sharp edges. George finds his friends are not necessarily still friends and a spouse can be unfaithful in more ways than one. And despite threats at every turn, he is driven to reconstruct the victim’s last hours while searching not only for a killer but for his own redemption.

Praise for Crime of Privilege

“A terrifically entertaining race of a read . . . jam-packed with intelligence, insight, morality and heart. Top-notch and highly recommended!”—John Lescroart

“A gripping thriller . . . an unsettling, multilayered look at the insidious symbiosis between power and corruption.”—Maclean’s

“A legal thriller and a murder mystery cloaked in pure enjoyment . . . The author’s wit, dry and cutting, is razor-sharp.”—Bookreporter

“An engaging, very well-paced novel . . . exciting and unpredictable.”—Examiner.com
Walter Walker is a trial lawyer in San Francisco. He lives in Marin County, California, and on Cape Cod.
“Walter Walker combines an experienced attorney’s sense of our flawed criminal justice system with a natural storyteller’s gift. Crime of Privilege is a twisting, engrossing, irresistible detective story.”—William Landay, author of Defending Jacob

“A stunning first legal thriller that is sure to get as much attention as John Grisham’s The Firmand Scott Turow’s Presumed Innocent . . . An outstanding crime story with spot-on characterization, a protagonist whose humiliating past compels sympathy, and a host of unexpected suspects. The novel’s moral complexity will appeal to readers who enjoyed works as diverse as Tom Wolfe’s Bonfire of the Vanities, Nelson DeMille’s The Gold Coast, and any number of contemporary thrillers.”—Library Journal (starred review)

“Walter Walker’s Crime of Privilege is a terrifically entertaining race of a read that also effortlessly manages to be jam-packed with intelligence, insight, morality and heart. Top-notch and highly recommended!”—New York Times bestselling author John Lescroart

“A gripping thriller . . . an unsettling, multilayered look at the insidious symbiosis between power and corruption.”—Maclean’s

“Fans of John Grisham and Scott Turow especially will love this engrossing story of murder involving high society. The author’s wit, dry and cutting, is razor-sharp and somewhat reminiscent of Nelson DeMille’s John Corey. . . . Crime of Privilege qualifies as a tale of moral redemption, a legal thriller, and a murder mystery cloaked in pure enjoyment.”—Bookreporter

“Crime of Privilege is a privilege to read . . . an engaging, very well-paced novel . . . exciting and unpredictable.”—Examiner.com

“A whodunit set in Lifestyles of the Rich and Famous . . . fast-paced with lots of sharp turns . . . You'll lose yourself in it.”—The Guardian (U.K.)

“A sheer pleasure to read . . . George must find his own moral compass, in a summer read notable for credible characters and unpredictable twists.”—Publishers Weekly (starred review)

“Walker maintains his dry, sometimes biting humor and moral edge. . . . A convincing portrait of misbehavior among the rich and powerful.”—Kirkus Reviews

“Crime of Privilege is not only a first-class legal thriller, it is an astute examination of our society and how we are corrupted by power and money. The rich are indeed different; they get away with murder. An absolutely engrossing read from beginning to end. Not only is it a well told story of crime and punishment, but also a finely nuanced tale of sin and redemption.”—Nelson DeMille

“Crime of Privilege is wonderfully written, and Walter Walker has a great talent, the God-given kind that can’t be taught or learned or acquired, and the reader knows it from the first paragraph of the book. The characters are complex and interesting yet also emblematic of all the players in the class war, which is the stuff of all epic stories. I love the protagonist, and I also love the portrayal of the world of the very rich. There is something about the very rich that is hard to describe, but Walter Walker got them in the camera’s lens perfectly.”—James Lee Burke

“A gripping, chilling tale that pits privilege against pride, with a not-entirely-innocent man caught in the untenable middle.”—Chris Pavone, New York Times bestselling author of The Expats