Words Are My Matter: Writings on Life and Books (Paperback) 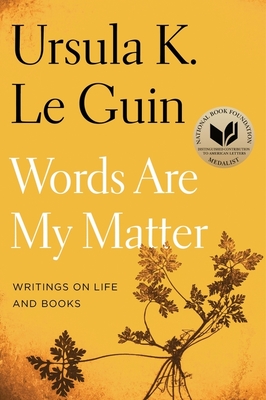 Words Are My Matter: Writings on Life and Books (Paperback)

A collection of essays on life and literature, from one of the most iconic authors and astute critics in contemporary letters.

Words Are My Matter is essential reading: a collection of talks, essays, and criticism by Ursula K. Le Guin, a literary legend and unparalleled voice of our social conscience. Here she investigates the depth and breadth of contemporary fiction—and, through the lens of literature, gives us a way of exploring the world around us.

In “Freedom,” Le Guin notes: “Hard times are coming, when we’ll be wanting the voices of writers who can see alternatives to how we live now … to other ways of being, and even imagine real grounds for hope. We’ll need writers who can remember freedom—poets, visionaries—realists of a larger reality.”

Le Guin was one of those authors and in Words Are My Matter she gives us just that: a vision of a better reality, fueled by the power and might and hope of language and literature.

"A brilliant collection showcases the essays, reviews, talks, book reviews and more from the National Book Foundation Medalist author and one of our foremost public literary intellectuals."  —NPR   "By breaking down the walls of genre, Le Guin handed new tools to twenty-first-century writers working in what [Michael] Chabon calls the 'borderlands,' the place where the fantastic enters literature."  — Julie Phillips, The New Yorker   “Spills over with insight, outrage and humor.’"  — Michael Dirda, Washington Post   "Her writing feels more urgent than ever."  — Zoe Carpenter, The Nation   "[Le Guin] proves, again and again in these pages, that she is not just a great author, but an equally skilled reader...Le Guin is especially astute when discussing the craft of writing and how it can be taught...I note that the title of this book is Words Are My Matter. Le Guin demonstrates that amply in this volume."  —Dallas Morning News   "[A] splendid collection that gave us Le Guin on the artist's task in meaning-making and her operating instructions for life...Le Guin was a seer in the largest sense — her gaze bent past our culture’s horizons of peril and possibility visible to most, and she saw the early warning sings of a darkening reality...[She] ends her admonition on a hopeful and empowering note — a clarion call for resistance, reminding us that any broken system is fixable, and that the fixing falls on our own participatory hands."  —Maria Popova, BrainPickings   “[W]hat she says of poetry—'Its primary job is simply to find the words that give it its right, true shape'—might well be said of all the shapely pieces in this generous, edifying, and invaluable collection."  —Booklist (starred review) —