Jacques Pépin Art Of The Chicken: A Master Chef's Paintings, Stories, and Recipes of the Humble Bird (Hardcover) 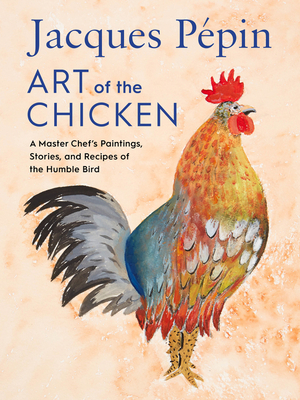 Jacques Pépin Art Of The Chicken: A Master Chef's Paintings, Stories, and Recipes of the Humble Bird (Hardcover)

From legendary chef Jacques Pepin, a book celebrating his lifelong love of chickens—featuring dozens of his celebrated paintings, a treasure trove of poignant and often humorous stories, and sprinkled with recipes throughout.

Chicken may not be an extravagant ingredient, but for master chef Jacques Pépin, it is the one he turns to most frequently—to cook and to paint. In this beautifully illustrated book, Jacques reminisces on his life through the lens of the humble bird, from his childhood in rural France, where he chased chickens and watched as his maman turned them into her poulet à la crème, to his demanding apprenticeship and long, illustrious career—cooking Chicken Chasseur for Charles de Gaulle and his family, turning down a chance to work as JFK’s White House Chef for a job at Howard Johnson’s, and appearing on television alongside food-world luminaries like Julia Child. Throughout are Jacques’ favorite chicken and egg recipes, conveyed as if he were sharing them over a dinner table. Most significantly, the book displays dozens of Jacques’ stunning paintings of chickens. “If it clucks or scratches, it’s likely that Jacques has painted it.” This unique book is the next best thing to a visit to Jacques’ home, which would include a tour of his art studio, captivating conversation as he cooks, and a toast with a glass of wine over a simple meal of perfect roast chicken.

The winner of sixteen James Beard Awards and author of over 30 cookbooks, including The Apprentice, Essential Pépin, and Jacques Pépin Quick & Simple, JACQUES PEPIN is a chef, author, television personality, educator, and artist, and has starred in 12 acclaimed PBS cooking series. His dedication to culinary education led to the creation of the Jacques Pépin Foundation in 2016.

“You might just learn a few breezy techniques for weeknight French-style dining with this new one from Pépin.” — Epicurious on Quick & Simple

“It’s very good…I’m now so loyal to him that I’ve been cooking from it every night.” — New York Times on Quick & Simple

“The recipes stand the test of time; this book will become a classic in your kitchen.” — Food & Wine on Quick & Simple

“A beguiling memoir.” — The New Yorker on The Apprentice