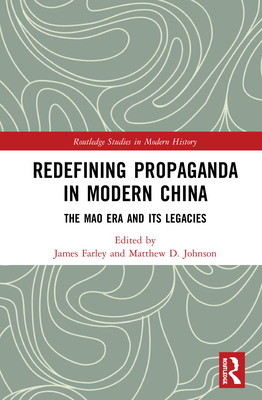 Usage of the political keyword 'propaganda' by the Chinese Communist Party has changed and expanded over time. These changes have been masked by strong continuities spanning periods in the history of the People's Republic of China from the Mao Zedong era (1949-76) to the new era of Xi Jinping (2012-present).

Redefining Propaganda in Modern China builds on the work of earlier scholars to revisit the central issue of how propaganda has been understood within the Communist Party system. What did propaganda mean across successive eras? What were its institutions and functions? What were its main techniques and themes? What can we learn about popular consciousness as a result? In answering these questions, the contributors to this volume draw on a range of historical, cultural studies, propa-ganda studies and comparative politics approaches. Their work captures the sweep of propaganda - its appearance in everyday life, as well as during extraordinary moments of mobilization (and demobilization), and its systematic continuities and discontinuities from the perspective of policy-makers, bureaucratic function-aries and artists. More localized and granular case studies are balanced against deep readings and cross-cutting interpretive essays, which place the history of the People's Republic of China within broader temporal and comparative frames.

Addressing a vital aspect of Chinese Communist Party authority, this book is meant to provide a timely and comprehensive update on what propaganda has meant ideologically, operationally, aesthetically and in terms of social experience.