Vox: The Rise of the Spanish Populist Radical Right (Routledge Studies in Extremism and Democracy) (Hardcover) 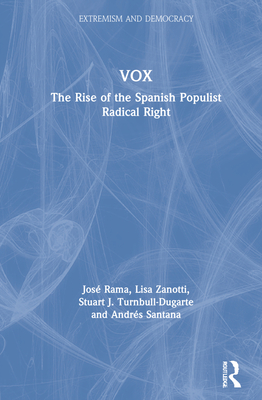 Vox: The Rise of the Spanish Populist Radical Right (Routledge Studies in Extremism and Democracy) (Hardcover)

This book examines VOX, the first major and electorally successful populist radical right-wing party to emerge in Spain since the death of General Franco, and the restoration of parliamentary democracy in the late 1970s.

In December 2018, VOX, a new party on the populist radical right, entered the Andalusian regional parliament, and played the role of kingmaker in the ensuing government formation discussions. Since then, under the leadership of Santiago Abascal, VOX has earned political representation in numerous local, regional and national elections. The party attracted more than 3.6 million votes in the November 2019 general election, making VOX the third largest party in the Spanish Congress. In two years, the party has become a key political challenger and an important player in Spanish politics. This book explains the origins of the party, its ideology and relationship with democracy, its appeal with voters, and its similarities with (and differences from) other populist radical right parties in Europe. It draws upon a rich source of domestic as well as cross-national survey data and a systematic analysis of party manifestos which provide a detailed account of the rise of VOX and what its emergence means for Spanish politics.

This volume will be of interest to scholars of comparative politics, political parties, voters and elections, Spanish politics, the populist radical right and populism in general.