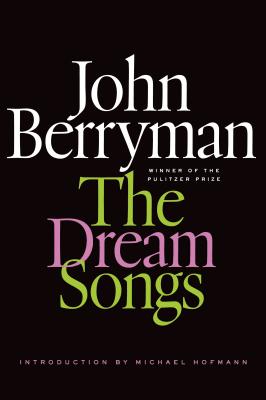 By John Berryman, Daniel Swift (Editor), Michael Hofmann (Introduction by)
$19.00
We can usually get this book in 3 to 5 days, except during a pandemic. We are doing our best

The complete Dream Songs--hypnotic, seductive, masterful--as thrilling to read now as they ever were

John Berryman's The Dream Songs are perhaps the funniest, saddest, most intricately wrought cycle of poems by an American in the twentieth century. They are also, more simply, the vibrantly sketched adventures of a uniquely American antihero named Henry. Henry falls in and out of love, and is in and out of the hospital; he sings of joy and desire, and of beings at odds with the world. He is lustful; he is depressed.

And while Henry is breaking down and cracking up and patching himself together again, Berryman is doing the same thing to the English language, crafting electric verses that defy grammar but resound with an intuitive truth: "if he had a hundred years," Henry despairs in "Dream Song 29," "& more, & weeping, sleepless, in all them time / Henry could not make good."

This volume collects both 77 Dream Songs, which won Berryman the Pulitzer Prize in 1965, and their continuation, His Toy, His Dream, His Rest, which was awarded the National Book Award and the Bollingen Prize in 1969. The Dream Songs are witty and wild, an account of madness shot through with searing insight, winking word play, and moments of pure, soaring elation. This is a brilliantly sustained and profoundly moving performance that has not yet-and may never be-equaled.

John Berryman (1914-1972) was an American poet and scholar. He won the Pulitzer Prize for 77 Dream Songs in 1965 and the National Book Award and the Bollingen Prize for His Toy, His Dream, His Rest, a continuation of the Dream Songs, in 1969.

Daniel Swift teaches at the New College of the Humanities in London. His first book, Bomber County, was longlisted for the Samuel Johnson Prize and the Guardian First Book award, and his essays and reviews have appeared in the New York Times, the New Statesman, and Harper’s.

Michael Hofmann is a poet and frequent contributor to The New York Times Book Review, and is widely regarded as one of the world's foremost translators of works from German to English. His original poetry collections include One Lark, One Horse and Where Have You Been? He has translated Willy Peter Reese's A Stranger to Myself, Joseph Roth's The Tale of the 1002nd Night, Herta Muller's The Land of the Green Plums, and Gottfried Benn's Impromptus. Hofman lives in London.

“I'd be shucking my obligation not to . . . make a renewed case for ‘The Dream Songs.' It's a book that collects Berryman's original 77 dream songs and adds the further 308 he later wrote. This new edition includes a fond, funny and brilliant introduction by the poet and translator Michael Hofmann.” —Dwight Garner, The New York Times

“The character of Henry [the hero of The Dream Songs] is a permanent addition to our literature.” —James Schevill