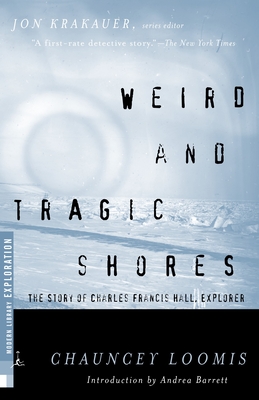 
We can usually get this book in 3 to 7 days, except during a pandemic. We are doing our best
In 1860, fifteen years after Sir John Franklin's ill-fated expedition disappeared in the Arctic, a Cincinnati businessman named Charles Francis Hall set out to locate and rescue the expedition's survivors. He was an amateur explorer, without any scientific training or experience, but he was driven by a sense of personal destiny and of religious and patriotic mission. Despite the odds against him, he made three forays into the far North, the final--and fatal--one taking him farther north than any westerner had ever gone before. But Hall was suddenly taken ill on that voyage and died under mysterious circumstances.

Ninety-seven years later, Chauncey Loomis headed an expedition to Hall's grave in northwestern Greenland. He exhumed Hall's frozen body and performed an autopsy. His findings suggest that the investigators of Hall's death nervously sidestepped the damning evidence. Loomis has written a masterful biography-cum-mystery that brilliantly evokes the lure of the Arctic and the brutal contest between man and nature.

With a new Introduction by Andrea Barrett, author of The Voyage of the Narwhal
Chauncey Loomis was born in New York in 1930 and studied at Phillips Exeter Academy and Princeton (A.B., Ph.D.) and Columbia universities (M.A.). He came to exploration through his interest in photography and has been on three expeditions to the Peruvian Andes and five to the Arctic. He recently retired after teaching English at Dartmouth College for thirty-six years. He lives in Massachusetts.

Jon Krakauer is the author of Into Thin Air, which was a finalist for the Pulitzer Prize, and Into the Wild. His work has appeared in many magazines, including Outside, Smithsonian, and National Geographic. He chose the books in the Modern Library Exploration series for their literary merit and historical significance--and because he found them such a pleasure to read.
"Fascinating."--The Boston Globe

"One of the best Arctic narratives ever written."--David Roberts