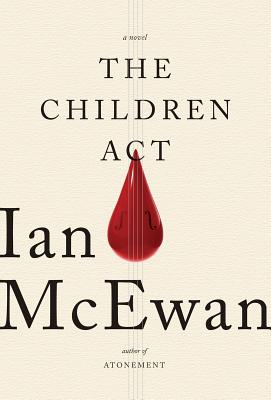 Fiona Maye is a leading High Court judge who presides over cases in the family court. She is renowned for her fierce intelligence, exactitude, and sensitivity. But her professional success belies private sorrow and domestic strife. There is the lingering regret of her childlessness, and now her marriage of thirty years is in crisis.

At the same time, she is called on to try an urgent case: Adam, a beautiful seventeen-year-old boy, is refusing for religious reasons the medical treatment that could save his life, and his devout parents echo his wishes. Time is running out. Should the secular court overrule sincerely expressed faith? In the course of reaching a decision, Fiona visits Adam in the hospital—an encounter that stirs long-buried feelings in her and powerful new emotions in the boy. Her judgment has momentous consequences for them both.

"McEwan presents a ferociously intelligent and competent woman struggling to rule on a complex legal matter while feeling humiliated and betrayed by her husband ... a notable volume from one of the finest writers alive."
—Ron Charles, The Washington Post

"A short, concise, strong novel in which a judge's ruling decides the fate of a teenage boy in ways she never intended or imagined ... it's a book that begins with the briskness of a legal brief written by a brilliant mind, and concludes with a gracefulness found in the work of few other writers."
—Meg Wolitzer, NPR

"A quietly exhilarating book ... The Children Act chronicles the recalibration of a 30-year marriage after it has fallen out of balance."
—Mona Simpson, Los Angeles Times

"Haunting ... a brief but substantial addition to the author’s oeuvre."
—Entertainment Weekly, A-

"[The Children Act’s] sense of life-and-death urgency never wavers ... you would have to go back to Saturday or Atonement to find scenes of equivalent intensity and emotional investment."
—Wall Street Journal

"Smart and elegant ... a grown-up novel that reminds us just how messy life can be and how the justice system ... doesn't always deliver justice."
—Bob Minzesheimer, USA Today

"The Children Act manages to be highly subtle and page-turningly dramatic at once ... Only a master could manage, in barely over 200 pages, to engage so many ideas, leaving nothing neatly answered."
—Boston Globe

"Heartbreaking and profound, it skillfully juxtaposes the dilemmas of ordinary life and tabloid-ready controversy."
—People

"As in Atonement, what doesn’t happen has the power to destroy; as in Amsterdam, McEwan probes the dread beneath civilized society. In spare prose, he examines cases, people, and situations, to reveal anger, sorrow, shame, impulse, and yearning. He rejects religious dogma that lacks compassion, but scrutinizes secular morality as well ... Few will deny McEwan his place among the best of Britain’s living novelists."
—Publishers Weekly, starred review

"McEwan, always a smart, engaging writer, here takes more than one familiar situation and creates at every turn something new and emotionally rewarding in a way he hasn’t done so well since On Chesil Beach."
—Kirkus Reviews, starred review

"Irrefutably creative ... With his trademark style, which is a tranquil mix of exacting word choice and easily flowing sentences, McEwan once again observes with depth and wisdom the universal truth in the uncommon situation."
—Booklist, starred review