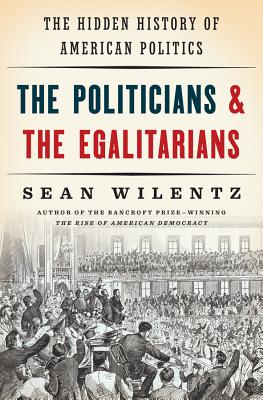 One of our most eminent historians reminds us of the commanding role party politics has played in America’s enduring struggle against economic inequality.

“There are two keys to unlocking the secrets of American politics and American political history.” So begins The Politicians & the Egalitarians, Princeton historian Sean Wilentz’s bold new work of history.

First, America is built on an egalitarian tradition. At the nation’s founding, Americans believed that extremes of wealth and want would destroy their revolutionary experiment in republican government. Ever since, that idea has shaped national political conflict and scored major egalitarian victories—from the Civil War and Progressive eras to the New Deal and the Great Society—along the way.

Second, partisanship is a permanent fixture in America, and America is the better for it. Every major egalitarian victory in United States history has resulted neither from abandonment of partisan politics nor from social movement protests but from a convergence of protest and politics, and then sharp struggles led by principled and effective party politicians. There is little to be gained from the dream of a post-partisan world.

With these two insights Sean Wilentz offers a crystal-clear portrait of American history, told through politicians and egalitarians including Thomas Paine, Abraham Lincoln, and W. E. B. Du Bois—a portrait that runs counter to current political and historical thinking. As he did with his acclaimed The Rise of American Democracy, Wilentz once again completely transforms our understanding of this nation’s political and moral character.

Sean Wilentz is the George Henry Davis 1886 Professor of American History at Princeton University and author of the Bancroft Prize–winning The Rise of American Democracy, Bob Dylan in America, and many other works. He is completing his next book, No Property in Man, on slavery, antislavery, and the Constitution, based on his Nathan I. Huggins Lectures delivered at Harvard in 2015.

Engrossing and deeply enriching…Wilentz the historian is visiting the past to send a message to those of us who live in the 21st century.
— Los Angeles Times

A bracing and persuasive defense of political partisanship as essential to a functioning democracy, and a timely reminder that from the country’s earliest days, political struggle has been the most effective mechanism for moving America toward the egalitarian ideals enunciated in its founding documents. It is a message that American citizens should never forget.
— Annette Gordon-Reed

Sean Wilentz is a rare historian who writes with confidence about the entire scope of American history and who does so in a way accessible to a broad reading public. The Politicians & the Egalitarians, like his previous books, is sure to command attention.

Wilentz evinces a vast knowledge of the American past while exploring, in his unique way, the interplay between raw party politics and the ebb and flow of reform efforts. In offering his take on pivotal figures from Jefferson to Du Bois, Lincoln to LBJ, Wilentz challenges us to debate history and ideas in a way that honors the best of the democratic system he has written about so provocatively throughout his career. Even when I most disagree with him, his arguments are always vigorous and passionate, lively and engaging.
— Henry Louis Gates, Jr.

This stimulating book provides a major new interpretation of the alliance between egalitarian social movements and partisan politics to achieve some of the most notable liberal victories in the American past. Sean Wilentz has done more than anyone else to blend social and political history in a manner that offers powerful new insights.
— James M. McPherson