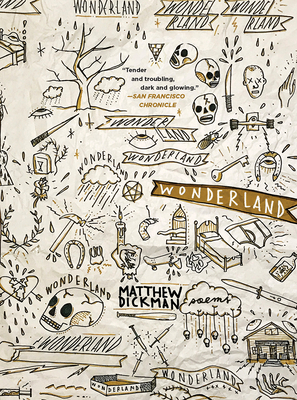 Matthew Dickman engages the traces of his own living past in poems that “light both heart and mind” (David Kirby, New York Times).

In the southeast Portland neighborhood of Matthew Dickman’s youth, parents are out of control and children are in chaos. Ghosts of longing, shame, and vulnerability haunt these luminous, hypnotic poems as Dickman confronts a childhood of ambient violence, well-intentioned but warped family relations, and confining definitions of identity. Wonderland reminds us that in neighborhoods filled with guns, skateboards, fights, booze, and heroin, and home to punk rockers, skinheads, poor kids, and single moms, we can also find innocence and love.

Matthew Dickman is the author of Husbandry, Wonderland, Mayakovsky’s Revolver, and All-American Poem, winner of the APR/Honickman First Book Prize. His other honors include a Guggenheim Fellowship and the Sarton Award for Poetry from the American Academy of Arts and Sciences. He lives in Portland, Oregon.
Tender and troubling, dark and glowing.
— San Francisco Chronicle

There is an unabashed rapture to these poems.… How astounding, and how perfectly troubling, to be led through this fearsome, familiar realm of choked silences and violent collisions by an intelligence as deft and buoyant as Matthew Dickman’s.
— Tracy K. Smith

It’s not possible to stop reading this book once you start, because it’s to the bone, every word, no window dressing, no artifice, no high-fat content.
— Grace Cavalieri - Washington Independent Review of Books

My first thought about the poems in Matthew Dickman’s new collection, Wonderland, was: Why doesn’t every poet write this way?… I wish others wrote with Dickman’s clarity and ability to engage.… These poems light both heart and mind. They stab you with memory’s shiny knife. ‘Ouch,’ you say, and then ‘thank you.’

[Dickman’s] ability not only to recollect but also to relive his childhood in the present moment, as if boy and man coexisted and conversed with each other, manifests a hard-won wisdom.
— Library Journal

The poems are ferocious and hardened by a backdrop of addiction and poverty.… In Dickman’s poems, readers observe as the bright-eyed potential of youth is shattered by the devastation of adulthood’s onset.
— Publishers Weekly

[Dickman’s] imagination, the possibility of better, helped him filter and preserve from the sharp and rusty clutter the beautiful moments of childhood. Thus, the collection relates a sweetness it should by all accounts be unable to render.
— Brian Juenemann - Register-Guard

Dickman reenters youth in all its peaks and valleys—without exaggeration or cliché.… While many of Dickman’s poems tell stories and carry narratives across poems, they also follow their own meandering logic, like a late night conversation.
— Emma Winters - America: The Jesuit Review

With Wonderland, Matthew Dickman captures the vicissitudes of childhood: the mess and wildness of it all, how we are both held and discarded, the way darkness subsumes the glow and vice versa. Dickman’s poems are deft and sparkling and never cease to tear into you with their profound rawness and beauty.

— Carrie Brownstein, star of Portlandia and author of Hunger Makes Me a Modern Girl