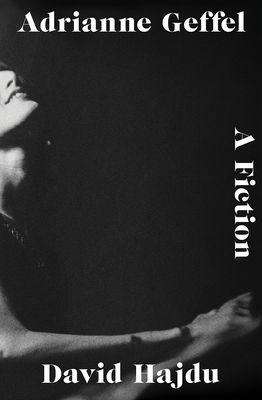 A poignant and hilarious oral history of a (fictitious) musical phenomenon.

Adrianne Geffel was a genius. Praised as the “Geyser of Grand Street” and the “Queen of Bleak Chic,” she was a one-of-a-kind artist, a pianist and composer with a rare neurological condition that enabled her to make music that was nothing less than pure, unmediated emotional expression. She and her sensibility are now fully integrated into the cultural lexicon; her music has been portrayed, represented, and appropriated endlessly in popular culture. But what do we really know about her? Despite her renown, Adrianne Geffel vanished from public life, and her whereabouts remain a mystery to this day.

David Hajdu cuts through the noise to tell, for the first time, the full story of Geffel’s life and work, piecing it together through the memories of those who knew her, inspired her, and exploited her—her parents, teachers, best friend, manager, critics, and lovers. Adrianne Geffel made music so strange, so compelling, so utterly unique that it is simply not to be believed. Hajdu has us believing every note of it in this slyly entertaining work of fiction.

A brilliantly funny satire, with characters that leap off the page, Adrianne Geffel is a vividly twisted evocation of the New York City avant-garde of the 1970s and ’80s, and a strangely moving portrait of a world both utterly familiar and like none we’ve ever encountered.

David Hajdu is the author of five acclaimed books of cultural history, biography, and criticism, including Lush Life, and a three-time National Book Critics Circle Award finalist. He is the music critic for the Nation, a professor at the Graduate School of Journalism at Columbia University, and a songwriter and librettist. He lives in New York City.

David Hajdu knows music.... A revealing—and at times hilarious—satire of the music business, fame, and the cult of personality.
— Clea Simon - Boston Globe

Both a love letter to cultural criticism and avant-garde art, and an intimate indictment of the same.
— Taylor Poulos - Guernica

Adrianne Geffel is an uncommon treat: a smart parody that even detractors of the experimental are likely to welcome.

David Hajdu’s super smart, super funny novel—a book about art and art-making and cultural criticism and authenticity and projection—knocked my socks off. Anyone who thinks about how we codify art and artists will dig Adrianne Geffel.

— Amanda Petrusich, author and staff writer for The New Yorker

Like The Real Life of Sebastian Knight or This Is Spinal Tap, David Hajdu’s Adrianne Geffel will become part of our cultural lexicon. This is satire at its best: painfully accurate, and utterly enjoyable.

I absolutely adore Adrianne Geffel. For me, it’s the book of the year and an amazing new summit for David Hajdu.