From Columbus to Castro: The History of the Caribbean 1492-1969 (Paperback) 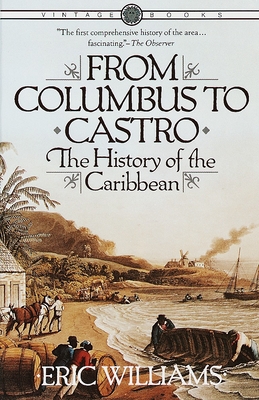 From Columbus to Castro: The History of the Caribbean 1492-1969 (Paperback)


We can usually get this book in 3 to 7 days, except during a pandemic. We are doing our best
The first of its kind, From Columbus to Castro is a definitive work about a profoundly important but neglected and misrepresented area of the world. Quite simply it's about millions of people scattered across an arc of islands -- Jamaica, Haiti, Barbados, Antigua, Martinique, Trinidad, among others -- separated by the languages and cultures of their colonizers, but joined together, nevertheless, by a common heritage.
Eric Williams was Prime Minister of Trinidad and Tobago from their achievement of independence in 1962 until his death in 1981. He is the author of the classic Capitalism and Slavery.
“Mr. Williams is forced to write about so much greed and cruelty that it is remarkable that he keeps his temper and his perspective. He succeeds, and his practical discussion of the current state of the Caribbean is among the best of its kind. . . . He writes better than many historians and almost all politicians.” —The New Yorker

“The first comprehensive history of the area. . . . Fascinating.” −The Observer