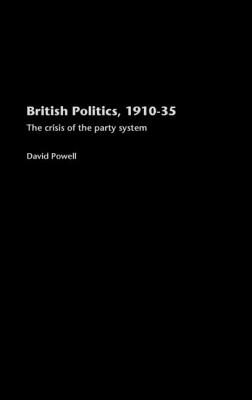 This accessible new study provides a much-needed guide to the pivotal period of British history between 1910 and 1935, against the background of upheavals such as the First World War and the transition to full democracy as a consequence of the Reform Acts of 1918 and 1928. Combining an up-to-date synthesis of previous work with a reappraisal of the main personalities, themes and events of the period, David Powell brings clarity to this crucial yet complex period.

Examining British politics on the eve of war, David Powell assesses the impact of war on the parties and the political system and the process of realignment that followed in the interwar period. In particular he analyzes to what extent these events as a whole constituted a crisis of the party system.

From the structure of the Edwardian political system and the party politics of pre-war Britain, through to the economic and political crisis of 1931 and the subsequent rebuilding of the party system, this comprehensive analysis offers an indispensable survey to all students of British history or politics.

Dr David Powell is Senior Lecturer in History at York St John, a college of the University of Leeds. His previous titles include The Edwardian Crisis: Britain 1901-14 (1996).