A Kingdom Strange: The Brief and Tragic History of the Lost Colony of Roanoke (Paperback) 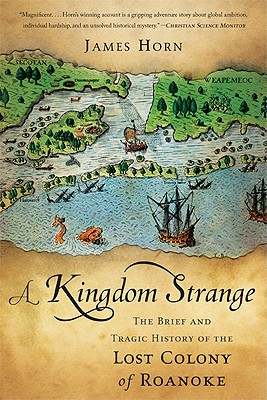 A Kingdom Strange: The Brief and Tragic History of the Lost Colony of Roanoke (Paperback)


We can usually get this book in 3 to 7 days, except during a pandemic. We are doing our best
In 1587, John White and 117 men, women, and children landed off the coast of North Carolina on Roanoke Island, hoping to carve a colony from fearsome wilderness. A mere month later, facing quickly diminishing supplies and a fierce native population, White sailed back to England in desperation. He persuaded the wealthy Sir Walter Raleigh, the expedition's sponsor, to rescue the imperiled colonists, but by the time White returned with aid the colonists of Roanoke were nowhere to be found. He never saw his friends or family again.

In this gripping account based on new archival material, colonial historian James Horn tells for the first time the complete story of what happened to the Roanoke colonists and their descendants. A compellingly original examination of one of the great unsolved mysteries of American history, A Kingdom Strange will be essential reading for anyone interested in our national origins.
James Horn is the president of the Jamestown Rediscovery Foundation. He is author and editor of eight books on colonial American history, including A Land as God Made It: Jamestown and the Birth of America and A Brave and Cunning Prince: The Great Chief Opechancanough and the War for America. He lives in Richmond, Virginia.
"Magnificent...Horn's winning account is a gripping adventure story about global ambition, individual hardship, and an unsolved historical mystery."—Christian Science Monitor

"The fate of the Lost Colony is a mystery at the heart of the nation's founding, chock full of odd characters, conspiracy theories, strange turns of events -- even enigmatic carvings left behind on trees. James Horn...has written a lucid and readable account of the Roanoke colony and the forces that created it. He makes a persuasive case for what must have happened to the settlers."—Washington Post

"[A] fast-paced tale of greed, adventure, and tragedy that distills pretty much all that is known and most of what is surmised about the Lost Colony."—Seattle Times