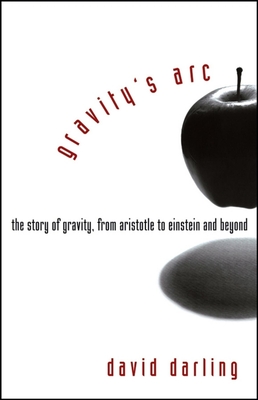 By David Darling
$24.95
Special Order -- These books can be hard for us to get

Advance Praise for Gravity's Arc ""A beautifully written exposition of the still mysterious force that holds our universe together--and the even more mysterious dark twin that may blow it apart.""
--Joshua Gilder, coauthor of Heavenly Intrigue ""A lucid book as up-to-date as the effect of gravity on the bones of astronauts.""
--Denis Brian, author of The Unexpected Einstein How did they do it? How did one of the greatest geniuses who ever lived retard the study of gravity for 2,000 years? How did a gluttonous tyrant with a gold nose revolutionize our view of the solar system? How could an eccentric professor shake the foundations of an entire belief system by dropping two objects from a tower? How did a falling apple turn the thoughts of a reclusive genius toward the moon? And how could a simple patent clerk change our entire view of the universe by imagining himself riding on a beam of light? In Gravity's Arc, you'll discover how some of the most colorful, eccentric, and brilliant people in history first locked, then unlocked the door to understanding one of nature's most essential forces. You'll find out why Aristotle's misguided conclusions about gravity became an unassailable part of Christian dogma, how Galileo slowed down time to determine how fast objects fall, and why Isaac Newton erased every mention of one man's name from his magnum opus Principia. You'll also figure out what Einstein meant when he insisted that space is curved, whether there is really such a thing as antigravity, and why some scientists think that the best way to get to outer space is by taking an elevator.

David Darling has a Ph.D. in astronomy and has been a full-time freelance science writer for more than twenty years. He is the author of "Teleportation: The Impossible Leap," as well as three science encyclopedias: "The Universal Book of Mathematics," "The Universal Book of Astronomy," and "The Complete Book of Spaceflight," all available from Wiley. His other narrative science titles include "Deep Time" and "Equations of Eternity," a "New York Times Notable Book." Darling's articles and reviews have appeared in "Astronomy," "Omni," "Penthouse," "New Scientist," the "New York Times," and the "Guardian," among others. He also hosts a major informational Web site, www.daviddarling.info.