Deckhand: Life on Freighters of the Great Lakes (Paperback) 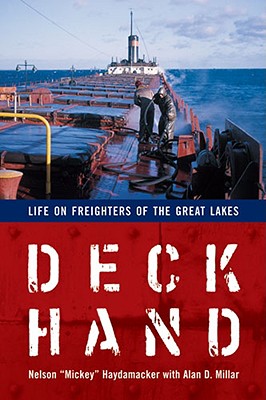 Deckhand: Life on Freighters of the Great Lakes (Paperback)

Long before popular television shows such as Dirty Jobs and The Deadliest Catch, everyday men and women---the unsung heroes of the job world---toiled in important but mostly anonymous jobs. One of those jobs was deckhand on the ore boats.

With numerous photographs and engaging stories, Deckhand offers an insider's view of both the mundane and the intriguing duties performed by deckhands on these gritty cargo vessels. Boisterous port saloons, monster ice jams, near drownings, and the daily drudgery of soogeying---cleaning dirt and grime off the ships---are just a few of the experiences Mickey Haydamacker had as a young deckhand working on freighters of the Great Lakes in the early 1960s. Haydamacker sailed five Interlake Steamship Company boats, from the modern Elton Hoyt 2nd to the ancient coal-powered Colonel James Pickands with its backbreaking tarp-covered hatches.

Deckhand will appeal to shipping buffs and to anyone interested in Great Lakes shipping and maritime history as it chronicles the adventures of living on the lakes from the seldom-seen view of a deckhand.

Mickey Haydamacker spent his youth as a deckhand sailing on the freighters of the Great Lakes. During the 1962 and '63 seasons Nelson sailed five different Interlake Steamship Company ore boats. He later went on to become an arson expert with the Michigan State Police, retiring with the rank of Detective Sergeant.

Alan D. Millar, to whom Haydamacker related his tale of deckhanding, spent his career as a gift store owner and often wrote copy for local newspaper, TV, and radio.

"...an immensely likeable story told as if Mickey were sharing a beer with you in one of the dives he visited in many lake ports."
—Joe Follansbee, The Fyddeye Guides