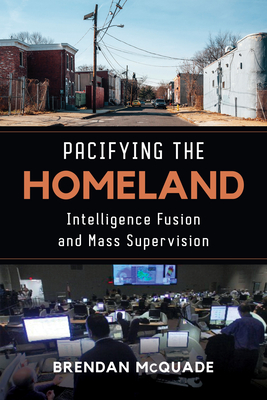 By Brendan McQuade
$40.43
We can usually get this book in 3 to 5 days, except during a pandemic. We are doing our best

The United States has poured over a billion dollars into a network of interagency intelligence centers called “fusion centers.” These centers were ostensibly set up to prevent terrorism, but politicians, the press, and policy advocates have criticized them for failing on this account. So why do these security systems persist? Pacifying the Homeland travels inside the secret world of intelligence fusion, looks beyond the apparent failure of fusion centers, and reveals a broader shift away from mass incarceration and toward a more surveillance- and police-intensive system of social regulation.

Brendan McQuade is Assistant Professor of Criminology at the University of Southern Maine.

"Through comprehensive research, McQuade offers a substantial contribution to studies in policing, surveillance, historical sociology, and social justice. . . . As the book makes clear, “mass supervision, an outgrowth and extension of mass incarceration, helps maintain the stark—and starkly racialized—inequalities that characterize the United States." Understanding intelligence fusion and mass supervision is necessary to challenge such conditions, an effort Pacifying the Homeland contributes to greatly."
— Journal of Criminal Justice Education

"Pacifying the Homeland is part of a wave of much needed critical policing studies that at once echo an earlier era in the study of radical criminology, while also heralding the arrival of a new interventionist, unapologetic structural analysis of policing."
— Punishment & Society