Garland of Visions: Color, Tantra, and a Material History of Indian Painting (Hardcover) 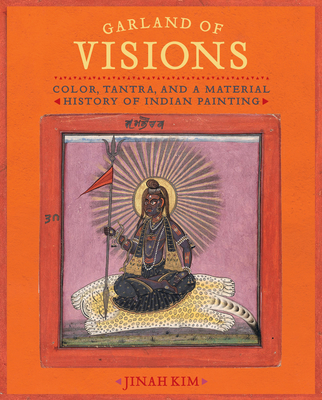 Garland of Visions: Color, Tantra, and a Material History of Indian Painting (Hardcover)


We can usually get this book in 3 to 7 days, except during a pandemic. We are doing our best
Garland of Visions explores the generative relationships between artistic intelligence and tantric vision practices in the construction and circulation of visual knowledge in medieval South Asia. Shifting away from the traditional connoisseur approach, Jinah Kim instead focuses on the materiality of painting: its mediums, its visions, and especially its colors. She argues that the adoption of a special type of manuscript called pothi enabled the material translation of a private and internal experience of "seeing" into a portable device. These mobile and intimate objects then became important conveyors of many forms of knowledge—ritual, artistic, social, scientific, and religious—and spurred the spread of visual knowledge of Indic Buddhism to distant lands. By taking color as the material link between a vision and its artistic output, Garland of Visions presents a fresh approach to the history of Indian painting.
Jinah Kim is George P. Bickford Professor of Indian and South Asian Art at Harvard University. She is the author of Receptacle of the Sacred: Illustrated Manuscripts and the Buddhist Book Cult in South Asia.