The Sack of Detroit: General Motors and the End of American Enterprise (Hardcover) 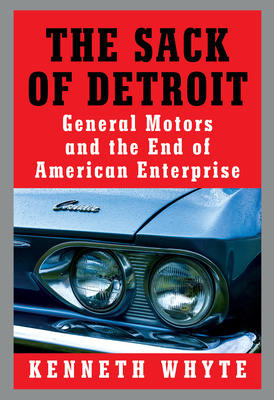 The Sack of Detroit: General Motors and the End of American Enterprise (Hardcover)


We can usually get this book in 3 to 7 days, except during a pandemic. We are doing our best
"Vigorous, provocative... The Sack of Detroit is compelling, bold and stylishly written."
—Barbara Spindel, The Wall Street Journal


A provocative, revelatory history of the epic rise—and unnecessary fall—of the U.S. automotive industry, uncovering the vivid story of innovation, politics, and business that led to a sudden, seismic shift in American priorities that is still felt today, from the acclaimed author of Hoover


In the 1950s, America enjoyed massive growth and affluence, and no companies contributed more to its success than automakers. They were the biggest and best businesses in the world, their leadership revered, their methods imitated, and their brands synonymous with the nation's aspirations. But by the end of the 1960s, Detroit's profits had evaporated and its famed executives had become symbols of greed, arrogance, and incompetence. And no company suffered this reversal more than General Motors, which found itself the main target of a Senate hearing on auto safety that publicly humiliated its leadership and shattered its reputation.

In The Sack of Detroit, Kenneth Whyte recounts the epic rise and unnecessary fall of America's most important industry. At the center of his absorbing narrative are the titans of the automotive world but also the crusaders of safety, including Ralph Nader and a group of senators including Bobby Kennedy. Their collision left Detroit in a ditch, launched a new era of consumer advocacy and government regulation, and contributed significantly to the decline of American enterprise. This is a vivid story of politics, business, and a sudden, seismic shift in American priorities that is still felt today.
KENNETH WHYTE is the author of Hoover: An Extraordinary Life in Extraordinary Times, which was a finalist for the National Book Critics Circle Award, and The Uncrowned King: The Sensational Rise of William Randolph Hearst, a Washington Post and Toronto Globe and Mail Book of the Year, and a nominee for four major Canadian book awards. He is a publishing and telecommunications executive and chairman of the Donner Canadian Foundation. He was formerly editor in chief of Maclean's magazine, editor of the monthly Saturday Night magazine, and founding editor of the National Post. He lives in Toronto.
"An adroit, thoroughly researched history... An authoritative contribution to business and automotive history."
—Kirkus