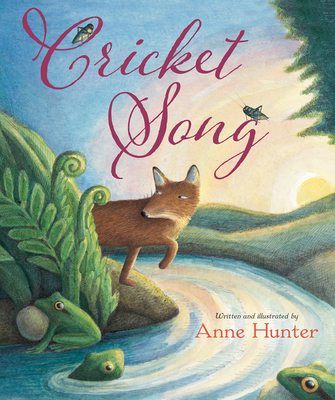 
Backordered. There will likely be a delay in getting this book
A poignant and beautiful bedtime book, Cricket Song connects two children on different continents through the evocation of sound and smell. Readers will love identifying various creatures portrayed in the book and watching what they are doing as the two children begin to fall to sleep in their beds on seemingly opposite sides of the world. While differences between cultures may be obvious, ultimately, this lovely story of sleep is a tale about interconnection.

Anne Hunter grew up in South Florida and now lives with her family in the hills of rural Vermont where she can hear the crickets, who sing with the frogs, who listen to the distant hoot of an owl. Anne is known for watching the squirrels, listening to the insects and writing about the natural world around us. She has written and illustrated many children’s books, including Possum’s Harvest Moon, which reviewers described as "a sensational selection," with illustrations that are "beautifully rendered" and have "a hushed mystery." Visit Anne at annehunterstudio.com.


* "The sonorous text, laced with soothing onomatopoeic animal sounds, transports wee listeners from the bedroom of one sleeping child to that of another. Soporific illustrations in pen, ink, and watercolor realistically capture nature's creatures in the muted hues of dusk, while deft use of crosshatching suggests nightfall's atmospheric shadows."
—  Kirkus, STARRED Review

* "The language is as lulling as an evening breeze, but it’s the illustrations that make this book truly extraordinary. Those who have experienced Hunter’s earlier titles...will be familiar with her gift for depicting the natural world. Here her watercolor and ink renderings of the landscape and the sea, the animals, and the purple-gold sunset clouds are an exquisite journey into the most restful part of the day."
—  School Library Journal, STARRED Review

* "The fluid, precisely worded text works seamlessly with the artwork, which is intelligently conceived, gracefully composed, and beautifully carried out."
—  Booklist, STARRED Review

"A lovely, tranquil bedtime book that suggests the world need not seem so vast."
—  Publishers Weekly