Inventology: How We Dream Up Things That Change the World (Paperback) 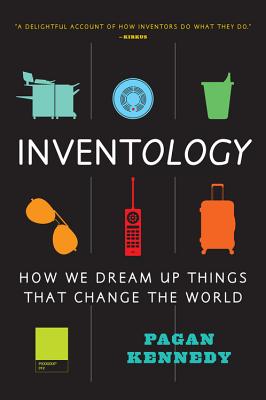 Inventology: How We Dream Up Things That Change the World (Paperback)


We can usually get this book in 3 to 7 days, except during a pandemic. We are doing our best
"Elegant prose and excellent reporting . . . By the time I had finished reading, I had underlined many intriguing ideas."—New York Times Book Review

“No doubt Inventology will be marketed to the creative business class, but there’s ample interest here even for readers who aren’t actively inventing anything.”—Boston Globe

A doctor realizes that an innocent-looking tube is killing his patients, then reads a newspaper article that inspires him to create a better version that serves as an early warning system for infections. A father cleans up after his toddler and builds a “sippy” cup that won’t spill. An engineer dreams of a different world and pioneers the cell phone.

By studying breakthroughs like these, we can learn how people imagine their way around “impossible” problems to discover groundbreaking answers. Pagan Kennedy reports on how enduring methods of invention can be adapted to the twenty-first century, as millions of us deploy tools like crowdfunding, big data, and 3-D printing to address our needs or realize our dreams. Drawing on fresh research and the surprising stories behind many inventions old and new to reveal the steps that most reliably produce discovery, Inventology is a myth-shattering book and a must-read for anyone who is curious about creativity and the mental leaps required to solve our most challenging problems.

“’Inventology’ may be a real science; researchers are beginning to study it, and teachers are teaching it . . . A delightful account of how inventors do what they do.”—Kirkus Reviews, starred review

“Offers a new perspective into the process of invention that will inform and illuminate.”—Publishers Weekly
PAGAN KENNEDY was the New York Times Magazine’s “Who Made That?” columnist, and is the author of the New York Times Notable Book Black Livingstone, the Barnes & Noble Discover pick Spinsters, and other books. Her work has appeared in the Boston Globe, Dwell, The Nation, and elsewhere.