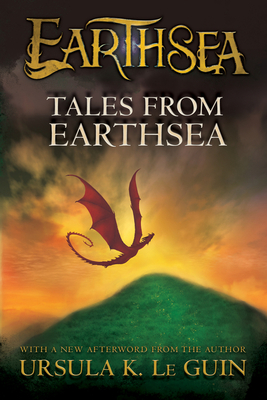 This is book number 5 in the The Earthsea Cycle series.

The tales of this book explore and extend the world established by Ursula K. Le Guin's must-read Earthsea Cycle. "The magic of Earthsea is primal; the lessons of Earthsea remain as potent, as wise, and as necessary as anyone could dream." (Neil Gaiman)

This collection contains the novella "The Finder," and the short stories "The Bones of the Earth," "Darkrose and Diamond," "On the High Marsh," and "Dragonfly." Concluding with an account of Earthsea's history, people, languages, literature, and magic, this edition also features two new maps of Earthsea.

With stories as perennial and universally beloved as The Chronicles of Narnia and The Lord of The Rings—but also unlike anything but themselves—Ursula K. Le Guin’s Earthsea novels are some of the most acclaimed and awarded works in literature. They have received accolades such as the National Book Award, a Newbery Honor, the Nebula Award, and many more honors, commemorating their enduring place in the hearts and minds of readers and the literary world alike.

Join the millions of fantasy readers who have explored these lands. As The Guardian put it: "Ursula Le Guin's world of Earthsea is a tangled skein of tiny islands cast on a vast sea. The islands' names pull at my heart like no others: Roke, Perilane, Osskil . . ."

"New and longtime Earthsea fans will be drawn to these impressive new editions."—Horn Book —