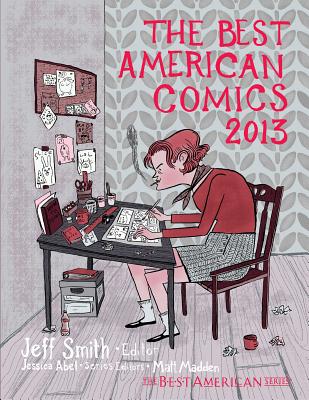 
This book has been declared out of stock indefinitely, so we are unlikely to be able to get it.
The Best American Comics showcases the work of both established and up-and-coming contributors. Editor Jeff Smith—creater of the classic comic Bone, a comedy/adventure about three lost cousins from Boneville—has culled the best stories from graphic novels, pamphlet comics, newspapers, magazines, mini-comics, and web comics to create this cutting-edge collection.

JEFF SMITH launched a company in 1991 called Cartoon Books to publish his comic book Bone. Against all odds, the small company flourished, building a reputation for quality stories and artwork. Word of mouth, critical acclaim, and a string of major awards, which continues to this day, helped propel Cartoon Books and Bone to the forefront of the comic book industry.

JESSICA ABEL is the author of the graphic novel La Perdida. MATT MADDEN is a cartoonist best known for his book 99 Ways to Tell a Story: Exercises in Style. Together, Abel and Madden are the authors of Mastering Comics and Drawing Words and Writing Pictures.


MATT MADDEN is a cartoonist and the author of 99 Ways to Tell a Story: Exercises in Style. Together, they are the authors of Drawing Words & Writing Pictures.

"At its best, a gorgeous, glorious inferno of imagination." -- Kirkus "The current narrative strength of the comics medium gets a solid showcase in this year’s volume, which should inspire much further reading." -- Publishers Weekly  "We’re living in a new golden age of comics...and there isn’t a better example of this than the Best American Comics series...Fans of the genre will find a surprise or two, but this is the ideal book to hand to a comics neophyte with mature tastes who is ready to be astounded." -- Booklist