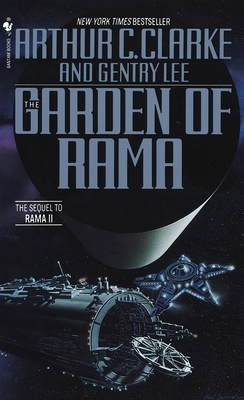 This is book number 3 in the Rama series.

In the spellbinding Arthur C. Clarke tradition, here is an exhilarating adventure into the hearts of both the Universe and mankind . . .

By the twenty-third century Earth has already had two encounters with massive, mysterious robotic spacecraft from beyond our solar system—the incontestable proof of an alien technology that far exceeds our own. Now three human cosmonauts are trapped aboard a labyrinthine Raman vessel, where it will take all of their physical and mental resources to survive.

Only twelve years into their journey do these intrepid travelers learn their destination and face their ultimate challenge: a rendezvous with a Raman base—and the unseen architects of their galactic home. The cosmonauts have given up family, friends, and possessions to live a new kind of life. But the answers that await them at the Raman Node will require an even greater sacrifice—if humanity is indeed ready to learn the awe-inspiring truth.