Wisdom of the Elders: Sacred Native Stories of Nature (Paperback) 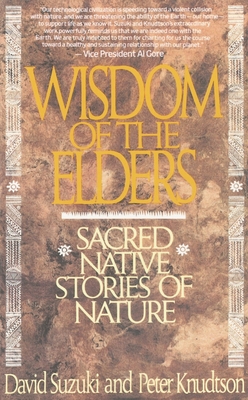 Wisdom of the Elders: Sacred Native Stories of Nature (Paperback)


This book has been declared out of stock indefinitely, so we are unlikely to be able to get it.
An in-depth, meticulously documented exploration of the ecological wisdom of Native Peoples from around the world

Arranged thematically, Wisdom of the Elders contains sacred stories and traditions on the interrelationships between humans and the environment as well as perspectives from modern science, which more often than not validate the sacred, ancient Wisdom of the Elders. Native peoples and environments discussed range from the Inuit Arctic and the Native Americans of the Northwest coast, the Sioux of the Plains, and the Pueblo, Hopi, and Navajo of the Southwest to the Australian Outback, to the rich, fecund tropics of Africa, Malaysia, and the Amazon.

“Our technological civilization is speeding toward a violent collision with nature, and we are threatening the ability of the Earth—our home—to support life as we know it. Suzuki and Knudtson’s extraordinary work powerfully reminds us that we are indeed one with the Earth. We are truly indebted to them for charting for us the course toward a healthy and sustaining relationship with our planet.”—Vice President Al Gore
David Suzuki is an internationally renowned geneticist and environmentalist and a cofounder of the David Suzuki Foundation. He is the author of more than fifty books and is a recipient of the Right Livelihood Award, UNESCO’s Kalinga Prize for the Popularization of Science, and in 2007 was named one of Time Magazine's Heroes of the Environment. He lives in Vancouver.

Peter Knudtson is a nature writer and former wildlife biologist. He received his master's degree from California State University and his bachelor's degree in premedical zoology from the University of California. Additionally, he studied at the University of North Carolina and the UC Berkeley Graduate School of Journalism. He worked as a wildlife biologist in Alaska before coauthoring Genethics and Wisdom of the Elders: Sacred Native Stories of Nature with renowned environmental activist and academic David Suzuki.