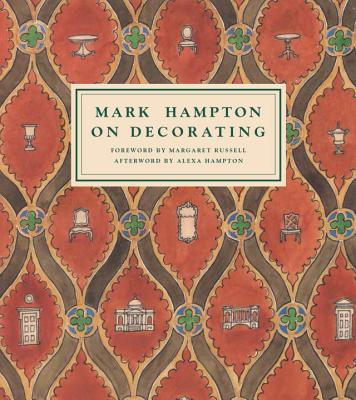 When On Decorating was published in 1989, it immediately became a touchstone for design profesionals and enthusiasts. Since then, the ideas and illustrations within these pages have inspired countless room schemes, vignettes, and color palettes. Mark Hampton's expert insights into the creation of elegant rooms, and his remarkably immediate voice, remain just as relevant today.

Posthumously celebrated by Architectural Digest as "one of the wold's twenty greatest designers of all time," Hampton regarded every design project as a collaboration. That same generosity of spirit pervades this book, offering signature principles that can easily be applied to any home. In the Colors section, Hampton makes a convincing case fo using dark green as a neutral, and encourages readers not to fear painting walls red. In Plans, he explains the keys to arranging a living room that telegraphs comfort, not just refinement. In Materials, Hampton demonstrates how strongly patterned wallpaper can visually enlarge a small space, contrary to popular belief.

Throughout this colleciton of essays, which were substantially expanded from his popular House & Garden columns, Hampton shares witty anecdotes and observations that render this education in home decoration a delight. Faithfully reproduced with his original, often-emulated watercolor illustrations and with an afterword by his duaghter, reowned designer Alexa Hampton, this beautiful reprint edition is a book to pore over, savor, and share.

After apprenticing to legendary designers David Hicks and Sister Parish, and then entering the prestigious firm of McMillen, MARK HAMPTON (1940-1998) founded his own firm in 1976. His works include the White House for President George H. W. Bush; Camp David; Gracie Mansion; the American Academy in Rome; and the American Embassy in Paris. An accomplished watercolorist, Hampton has a painting in the permanent collection of the Victoria & Albert Museum in London.

MARGARET RUSSELL is the Editor in Chief of Architectural Digest and the magazine's website, archdigest.com, and she is the author of several books, among them So Chic and Style and Substance.

ALEXA HAMPTON has been president of Mark Hampton LLC since 1998. An acclaimed designer, she is the author of Language of Interior Design and Decorating in Detail. She lives in New York with her family.