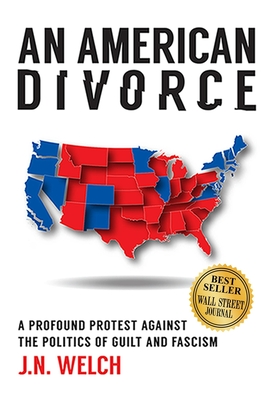 By J. N. Welch
$26.44
Special Order -- These books can be hard for us to get
(This book cannot be returned, even for store credit.)

Is the United States facing a second Civil War?

Roughly 70% of Americans believe another Civil War could occur in today's political climate. And it is easy to understand why. Escalating racial tensions. Two impeachments in the last four presidencies. A partisan divide perhaps greater than that of the 1860s.

With impeccable timing, this Wall Street Journal best-selling author contemplates "divorce" in the United States. While many pundits have opinions as to "why" the US is so divided, this book attempts to answer the broader question of whether both sides should simply agree to disagree, and consider the pros and cons of going their own separate ways.

In what could best be described as the ultimate game of revolutionary poker, the writer brilliantly contemplates the radical idea of "divorce" in America. Writing under a pseudonym to ensure his freedom to speak hard truths, the author contemplates the political, cultural, and geographical ramifications associated with a "good" and "bad" breakup of the United States of America.

From the benign to the revolutionary, An American Divorce has the potential to expand today's media conversation into an all-out mass-movement frenzy about why it may simply be too late for Americans to unify. In contemplating the radical idea of divorce in the US, the author explores the following questions:

- Why is the USA facing a revolutionary environment no less profound than that of the Civil War?

- Can a new political party break the gridlock in Washington D.C?

- Should Americans demand a constitutional convention to discuss breaking up the USA by geography?

- Or are both sides heading on an "ugly" divorce path that could ultimately be decided by an undemocratic set of circumstances?

Republicans may be surprised-but the author doesn't want to destroy everyday Democrats. Nor is this book based on the ignorant and primitive idea of dividing the United States by race. Rather, An American Divorce targets the "Marxist thought police"-social science academics, radical leftist agitators, and those college-educated radicals who use the vehicle of social justice to pursue an intellectual fantasyland that will never exist.

Released as the nation is reeling from a global pandemic, economic uncertainty, and racial and civil unrest, this book is a must-read for those Americans who hope to move beyond the hate, division, and dysfunction that we today call the United States of America.

Controversial, provocative, and revolutionary, An American Divorce is urgent reading for our troubled times.