A Leg to Stand On (Paperback) 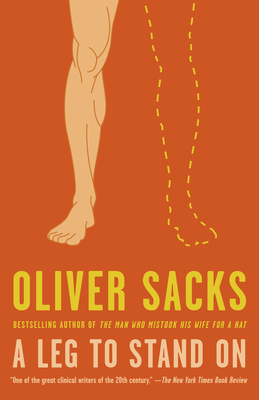 A Leg to Stand On (Paperback)


This book has been declared out of stock indefinitely, so we are unlikely to be able to get it.
Dr. Oliver Sacks’s books Awakenings, An Anthropologist on Mars, and the bestselling The Man Who Mistook His Wife for a Hat have been acclaimed for their extraordinary compassion in the treatment of patients affected with profound disorders.

In A Leg to Stand On, it is Sacks himself who is the patient: an encounter with a bull on a desolate mountain in Norway has left him with a severely damaged leg. But what should be a routine recuperation is actually the beginning of a strange medical journey when he finds that his leg uncannily no longer feels like part of his body. Sacks’s brilliant description of his crisis and eventual recovery is not only an illuminating examination of the experience of patienthood and the inner nature of illness and health but also a fascinating exploration of the physical basis of identity.

This 1984 classic is now available in an expanded edition with a new foreword, written by Kate Edgar, executive director of the Oliver Sacks Foundation.
Dr. Oliver Sacks spent more than fifty years working as a neurologist and writing books about the neurological predicaments and conditions of his patients, including The Man Who Mistook His Wife for a Hat, Musicophilia, and Awakenings. The New York Times referred to him as "the poet laureate of medicine," and over the years, he received many awards, including honors from the Guggenheim Foundation, the National Science Foundation, the American Academy of Arts and Letters, the American Academy of Arts and Sciences, and the Royal College of Physicians. His memoir, On the Move, was published shortly before his death in August 2015.
“A neurologist in [the] great tradition. . . . A story about the nature of selfhood—a narrative comparable to Conrad’s ‘The Secret Sharer.’”
—Jerome Bruner, The New York Review of Books

“In calling for a ‘neurology of the soul’ and a ‘deeper and more humane medicine,’ Sacks’s remarkable book raises issues of profound importance for everyone interested in health care and the humane application of science.”
—The Washington Post

“Superb . . . Dr. Sacks tells the story of an extraordinary experience . . . that brought him not merely near death but in an intimate tango with it danced to the sound of life itself.”
—Maria Popova, Brain Pickings

“In this extraordinary book, Sacks chronicles his own journey from traumatic injury to health. By so doing, he built a bridge of understanding between himself and his patients that became the foundation of what he called ‘a new and deeper medicine.’”
—Steve Silberman, author, NeuroTribes: The Legacy of Autism and the Future of Neurodiversity