On the Way Out, Turn Off the Light: Poems (Hardcover) 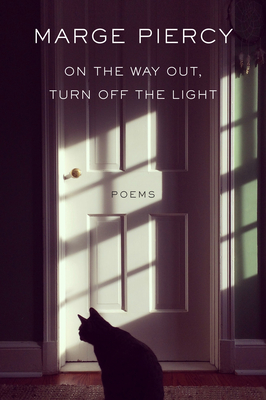 On the Way Out, Turn Off the Light: Poems (Hardcover)


On Our Shelves Now as of 24 Hours Ago. Call first to confirm.
A bountiful group of poems--direct, honest, and revelatory--that reflect on language, nature, old age, young love, Judaism, and our current politics, from one of our most read and admired poets

"Words are my business," Marge Piercy begins her twentieth collection of poetry, a glance back at a lifetime of learning, loving, grieving, and fighting for the disenfranchised, and a look forward at what the future holds for herself, her family and friends, and her embattled country. In the opening section, Piercy tells of her childhood in Detroit, with its vacant lots and scrappy children, the bike that gave her wings, her ambition at fourteen to "gobble" down all knowledge, and a too-early marriage ("I put on my first marriage / like a girdle my skinny body / didn't need"). We then leap into the present, her "twilight zone," where she is "learning to be quiet," learning to give praise despite it all. There are funny poems about medicine ads with their dire warnings, and some possible plusses about being dead: "I'll never do another load of laundry . . ." There is "comfort in old bodies / coming together," in a partner's warmth--"You're always warm: warm hands / smooth back sleek as a Burmese cat./ Sunny weather outside and in."

Piercy has long been known for her political poems, and here we have her thoughts on illegal immigrants, dying languages, fraught landscapes, abortion, President-speak. She examines her nonbeliever's need for religious holidays and spiritual depth, and the natural world is appreciated throughout. On the Way Out, Turn Off the Light is yet more proof of Piercy's love and mastery of language--it is moving, stimulating, funny, and full of the stuff of life.
MARGE PIERCY is the author of nineteen previous poetry collections, a memoir, seventeen novels, five nonfiction books, and a book of short stories. Her work has been translated into twenty-three languages, and she has received many honors, including the Golden Rose, the oldest poetry award in the country. She lives on Cape Cod with her husband, Ira Wood, the novelist, memoirist, community radio interviewer, and essayist, and their four cats. She has given readings, lectures, or workshops at more than five hundred venues in the United States and abroad.
“An ode to a life lived big and full . . . Direct, earthy poems [that] steer us towards something larger than the self.” —Sophia Starmack, The Provincetown Independent

“Piercy’s collection is full of life, companionship, and the importance of advocating for others . . . Multifaceted, [it] touches on her identities as activist, teacher, cat lover, novelist, and poet.”
—Publishers Weekly

“Her varied themes include politics (emphatically leftist), gender roles, Jewishness, womanhood, age, and mortality, all of which she approaches with a matter-of-factness that is one of the gifts of long and considered experience. Piercy shares her life with admirable honesty.” —AudioFile