The Legend of the Christmas Witch (Hardcover) 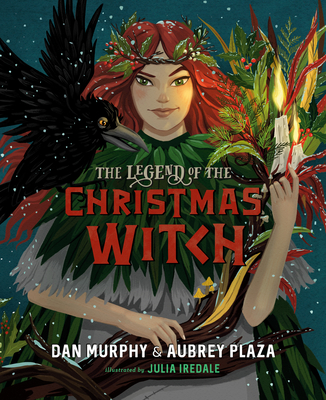 The Legend of the Christmas Witch (Hardcover)


On Our Shelves Now as of 24 Hours Ago. Call first to confirm.
From Parks and Recreation star Aubrey Plaza and creative partner Dan Murphy comes the long lost tale of the Christmas Witch, Santa Claus's much misunderstood twin sister. The perfect gift for the holiday season and beyond!

Gather ‘round the fire to hear a Christmas legend that has never been told before...until now. Each year a mysterious figure sweeps into town, leaving behind strange gifts in the night. No, not Santa Claus, but his sister…

Her story begins many, many years ago when her brother was torn away from her as a child. Raised alone by a witch of the woods, Kristtörn's powers of magic grew, as did her temper. Determined to find her long lost twin, she set out on a perilous journey across oceans to find him. But what she found instead was a deep-seated fear of her powers and a confrontation that would leave the fate of Christmas hanging in the balance.

From award-winning producer and actress Aubrey Plaza and her creative partner Dan Murphy comes a holiday story unlike any told before. With all the richness of classic folklore, they’ve woven a tale of bravery, love and magic. Whatever you thought you knew about Christmas…think again.
Aubrey Plaza, originally from Delaware, is best known for her role as April Ludgate on Parks and Recreation. She has produced and starred in several films, as well as performed at the Upright Citizens Brigade Theatre in New York. She currently lives in California and is known to dress up like a witch every Christmas.

Dan Murphy is a writer and producer who lives in Los Angeles, California. Originally from Delaware, he is a graduate of the Tisch School of the Arts at NYU and has been creative partners with Aubrey for over fifteen years.


Julia Iredale is an illustrator fromVictoria, British Columbia. She studied illustration at Emily Carr University of Art and Design, and now spends her time painting, making books, and, whenever possible, escaping into the magic forests of the Canadian West Coast.
Raves for The Legend of the Christmas Witch:

"In a story that pairs the popular holiday with the pagan background of Yuletide, questions of intolerance and human flaws offer interesting layers to ponder and discuss... A well-written and thought provoking tale."—Kirkus Reviews

"The story is steeped heavily in the fairy tale tradition—raven scouts, capes woven from leaves, the ability to talk to animals, a queen who lays frozen under ice—and, especially when paired with illuminated-style borders and the deeply saturated colors of the artwork, it conjures up the magic of the Grimms and Andersen."—Booklist