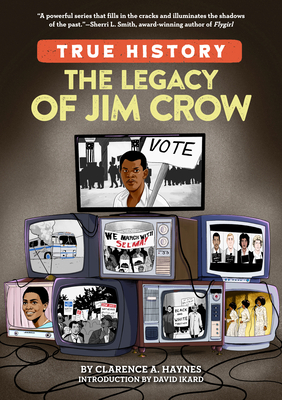 By Clarence A. Haynes, Jennifer Sabin (Created by), David Ikard (Introduction by)


We can usually get this book in 3 to 7 days, except during a pandemic. We are doing our best
“A powerful series that fills in the cracks and illuminates the shadows of the past.” –Sherri L. Smith, award-winning author of Flygirl

Introducing a new nonfiction series for the next generation of activists, uncovering the hidden history of the United States through an anti-racist lens.

The true story of the discriminatory laws and ideas that affected African American life for generations.

In the late nineteenth century, white lawmakers in the United States created a set of policies, collectively called “Jim Crow,” that created segregated facilities, like schools and parks, for African Americans in the South.
But Jim Crow–type policies didn’t just affect the South. These policies have had far-reaching effects across America, impacting where Black people live, how they’re treated by the criminal justice system, and how they’re portrayed in TV and film.
The Legacy of Jim Crow explores the details that have far too often been covered up, along with exclusive interviews with experts, including Pulitzer Prize–winning author Jeffrey C. Stewart.
Clarence A. Haynes is an experienced book editor and writer whose specialties range from diasporic history and pop culture to science fiction/fantasy, mythology, and young-adult narratives.