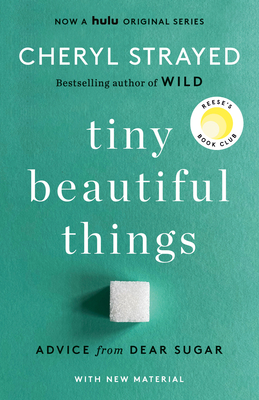 
On Our Shelves Now as of 24 Hours Ago. Please call first to confirm.
REESE'S BOOK CLUB PICK • An anniversary edition of the bestselling collection of "Dear Sugar" advice columns written by the author of #1 New York Times bestseller Wild—featuring a new preface and six additional columns. Soon to be a Hulu Original series.

For more than a decade, thousands of people have sought advice from Dear Sugar—the pseudonym of bestselling author Cheryl Strayed—first through her online column at The Rumpus, later through her hit podcast, Dear Sugars, and now through her popular Substack newsletter. Tiny Beautiful Things collects the best of Dear Sugar in one volume, bringing her wisdom to many more readers. This tenth-anniversary edition features six new columns and a new preface by Strayed. Rich with humor, insight, compassion—and absolute honesty—this book is a balm for everything life throws our way.
Cheryl Strayed is the author of the number-one New York Times bestseller Wild: From Lost to Found on the Pacific Crest Trail, which has sold more than four million copies worldwide and was made into an Oscar-nominated major motion picture. Tiny Beautiful Things was adapted as a play that has been staged in theaters across the country and as a Hulu television series airing in 2023. Cheryl is also the author of Brave Enough, which brings together more than one hundred of her inspiring quotes, and the debut novel Torch. She has hosted two hit podcasts, Sugar Calling and Dear Sugars. She lives in Portland, Oregon.
“Charming, idiosyncratic, luminous, profane. . . . Sugar is the ultimate advice columnist for the internet age. . . . She shines out amid the sea of fakeness.” —The New Republic

“Revolutionary. . . . In Strayed’s hands, the advice column [is] a radical therapeutic experience. . . . like downing a cup of ayahuasca. . . Strayed would transform your existential problem into swooning, bespoke essays that exposed as much of the advice-giver as they did of the petitioner. . . . [She] has steadily opened up a new vocabulary for how we express ourselves, personally and politically." ­—The New Yorker

“Destined to become a classic of the form.” —Aimee Bender

“These pieces are nothing short of dynamite.” —Salon