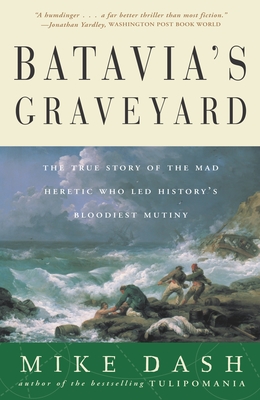 
We can usually get this book in 3 to 7 days, except during a pandemic. We are doing our best
In 1628 the Dutch East India Company loaded the Batavia, the flagship of its fleet, with a king’s ransom in gold, silver, and gems for her maiden voyage to Java; the ship itself was a tangible symbol of the world’s richest and most powerful monopoly.

The company also sent along a new employee to guard its treasure. He was Jeronimus Corneliszoon, a disgraced and bankrupt man with great charisma and dangerously heretical ideas. With the help of a few disgruntled sailors, he hatched a plot to seize the ship and her riches. The mutiny might have succeeded, but in the dark morning hours of June 3, 1629, the Batavia smashed through a coral reef and ran aground on a small chain of islands near Australia. The captain and skipper escaped the wreck, and in a tiny lifeboat they set sail for Java—some 1,500 miles north—to summon help. More than 250 frightened survivors waded ashore, thankful to be alive. Unfortunately, Jeronimus and the mutineers had survived too, and the nightmare was only beginning.
Mike Dash is the author of the national bestseller Tulipomania. A journalist and Cambridge-educated historian, he lives in London.
“Brilliantly crafted, deeply researched . . . a gruesome and powerfully written history. [Dash] provides a thorough look at the underlying subject of all expedition stories—the human heart.” —Star-Tribune (Minneapolis)

“Horrific and mesmerizing . . . No history I’ve read in years places you so deeply inside a piece of the past.”—National Geographic Adventure

“Scholarly and exhilarating. Not only history, but an enthralling sea yarn and true-crime thriller.” —Associated Press

“I read it in one sitting, absolutely enchanted.” —St. Louis Post-Dispatch