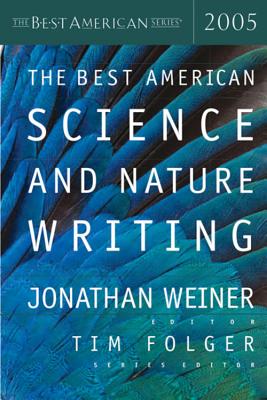 This is book number 2005 in the Best American series.

The Best American series has been the premier annual showcase for the country's finest short fiction and nonfiction since 1915. Each volume's series editor selects notable works from hundreds of periodicals. A special guest editor, a leading writer in the field, then chooses the very best twenty or so pieces to publish. This unique system has made the Best American series the most respected -- and most popular -- of its kind.

Jonathan Weiner, guest editor, has won the Pulitzer Prize, the National Book Critics Circle Award, the Los Angeles Times Book Prize, and many other honors. He lives in New York City and teaches science writing at the Columbia School of Journalism.

TIM FOLGER is a contributing editor at Discover and writes about science for several magazines. He lives in New Mexico.