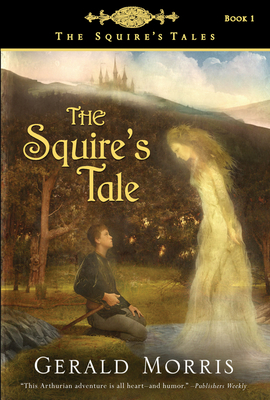 Growing up an orphan in an isolated cottage in the woods, young Terence never expected much adventure. But upon the arrival of Gawain, his life takes a surprising turn. Gawain is destined to become one of the most famous knights of the Round Table. Terence becomes Gawain's squire and leaves his secluded life for one of adventure in King Arthur's court. In no time Terence is plunged into the exciting world of kings, wizards, knights, wars, magic spells, dwarfs, damsels in distress, and enchanters. As he adjusts to his new life, he proves to be not only an able squire but also a keen observer of the absurdities around him. His duties take him on a quest with Gawain and on a journey of his own, to solve the mystery of his parentage. Filled with rapier-sharp wit, jousting jocularity, and chuckleheaded knights, this is King Arthur's court as never before experienced.

When Gerald Morris was in fifth grade he loved Greek and Norse mythology and before long was retelling the stories to his younger sister and then to neighborhood kids. He began carrying a notebook in which he kept some of the details related to the different stories. The joy he found in retelling those myths continued when he discovered other stories. According to Gerald Morris, “I never lost my love of retelling the old stories. When I found Arthurian literature, years later, I knew at once that I wanted to retell those grand tales. So I pulled out my notebook . . . I retell the tales, peopling them with characters that I at least find easier to recognize, and let the magic of the Arthurian tradition go where it will.” Gerald Morris lives in Wausau, Wisconsin, with his wife and their three children. In addition to writing he serves as a minister in a church.

"The author leaves some tantalizing questions, and the tale is filled with knightly derring-do." Horn Book

"A 14-year-old boy lives the adventure of being a knight's squire in this novel based on the legends of Camelot. Terence seems a typical youth of medieval England, except for the rumors that he has faeries for parents and a guardian who ``remembers'' the future. When Sir Gawain offers Terence the chance to become his squire, and to teach him how to become a knight, the lad agrees and soon the pair are on the road. Morris packs his story with plenty of familiar faces, including King Arthur, Merlin, and the Lady of the Lake, and the narrative is constructed of events drawn from Arthurian legend. There are plenty of sword fights and flashes of sorcery to delight readers, while the plot moves at a swift clip. Although the tale ends long before Terence earns his knighthood, he does learn the true identity of his parents, especially his father, Ganscotter the Enchanter. An author's note discusses the sources for the novel, providing plenty of additional territory for budding Arthurians to explore." Kirkus Reviews —