One Morning in Maine (Hardcover) 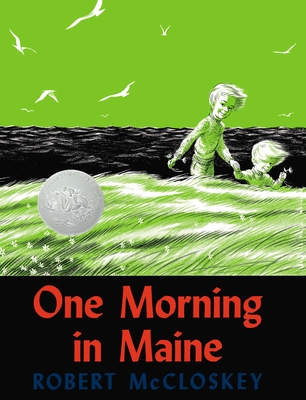 One Morning in Maine (Hardcover)


On Our Shelves Now as of 24 Hours Ago. Please call first to confirm.
A Caldecott Honor Book!

Today is a specidal day for Sal because she gets to go to Buck's Harbour with her dad. But when she wakes up to brush her teeth with her baby sister, she discovers something shocking.... Her tooth is loose!

And that's just the start of a huge day!
Robert McCloskey (1914-2003) wrote and illustrated some of the most honored and enduring children's books ever published. He grew up in Hamilton, Ohio, and spent time in Boston, New York, and ultimately Maine, where he and his wife raised their two daughters. The first ever two-time Caldecott Medal winner, for Make Way for Ducklings and Time of Wonder, McCloskey was also awarded Caldecott Honors for Blueberries for Sal, One Morning in Maine, and Journey Cake, Ho! by Ruth Sawyer.  He was declared a Living Legend by the Library of Congress in 2000.  You can see some of his best-loved characters immortalized as statues in Boston's Public Garden and Lentil Park in Hamilton, Ohio.
"As we follow the story of Sal and her lost tooth we feel as refreshed as though we had spent a day with her family on their island."--Saturday Review