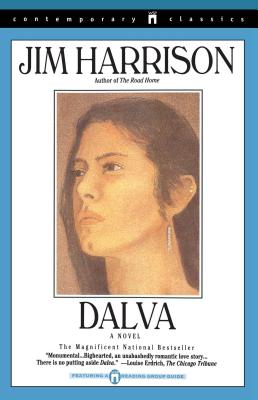 
We can usually get this book in 3 to 7 days, except during a pandemic. We are doing our best
From her home on the California coast, Dalva hears the broad silence of the Nebraska prairie where she was born and longs for the son she gave up for adoption years before. Beautiful, fearless, tormented, at forty-five she has lived a life of lovers and adventures. Now, Dalva begins a journey that will take her back to the bosom of her family, to the half-Sioux lover of her youth, and to a pioneering great-grandfather whose journals recount the bloody annihilation of the Plains Indians. On the way, she discovers a story that stretches from East to West, from the Civil War to Wounded Knee and Vietnam -- and finds the balm to heal her wild and wounded soul.
Jim Harrison is the author of three volumes of novellas, Legends of the Fall, The Woman Lit by Fireflies, and Julip; seven novels, Wolf, A Good Day to Die, Farmer, Warlock, Sundog, Dalva, and The Road Home; seven collections of poetry; and a collection of nonfiction, Just Before Dark. He has been awarded a National Endowment for the Arts grant and a Guggenheim Fellowship. He lives in northern Michigan and Arizona.
Louise Erdrich The Chicago Tribune Monumental...Bighearted, an unabashedly romantic love story...There is no putting aside Dalva.

The Los Angeles Times Book Review Jim Harrison's Dalva is the story of a remarkable modern woman's search for her son....Harrison beautifully conveys Dalva's essential femininity...Dalva asserts that she has never been seduced -- has always, subtly, done the seducing of lovers herself...Harrison's Dalva may well seduce you, too.

The Washington Post Book World Dalva...is that rare fictional creation, a character whom the reader dearly would love to meet.

The Boston Globe Harrison's stories move with random power and reach in the manner of Melville and Faulkner.

The London Sunday Times Jim Harrison is a writer with immortality in him.

Louise Erdich Chicago Tribune Fascinating...a work of humor and a unified lament....Voices that cut through time and cross the barriers of culture and gender to achieve a work in chorus ...there is no putting aside Dalva until the time bombs go off, the identities are revealed, and the skeletons almost literally tumble from the closets...Dalva is suspended in its own beauty...a book to...read with trust and exuberance.

The New York Times Book Review Harrison's storytelling instincts are nearly flawless...The people in Dalva reemerge as full-blooded individuals who almost incidentally embody much of the innocence, carelessness, and urgency that played so large a part in the settling of this country. Best of all, perhaps, are Mr. Harrison's descriptions of the land -- the untamed deserts, plains, forests, and arroyos of what was once the Western frontier...tough but rhapsodic language.

San Francisco Chronicle A fascinating novel about an American woman...Harrison uses his pen as a sword to right wrongs and settle scores....He takes bigger risks, letting go of old habits and surrendering to his own impassioned imagination.