The Path to Power: The Years of Lyndon Johnson I (Paperback) 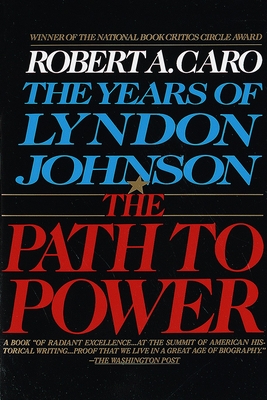 The Path to Power: The Years of Lyndon Johnson I (Paperback)

By Robert A. Caro

This is book number 1 in the The Years of Lyndon Johnson series.

The Years of Lyndon Johnson is the political biography of our time. No president—no era of American politics—has been so intensively and sharply examined at a time when so many prime witnesses to hitherto untold or misinterpreted facets of a life, a career, and a period of history could still be persuaded to speak.

The Path to Power, Book One, reveals in extraordinary detail the genesis of the almost superhuman drive, energy, and urge to power that set LBJ apart. Chronicling the startling early emergence of Johnson’s political genius, it follows him from his Texas boyhood through the years of the Depression in the Texas hill Country to the triumph of his congressional debut in New Deal Washington, to his heartbreaking defeat in his first race for the Senate, and his attainment, nonetheless, of the national power for which he hungered.

We see in him, from earliest childhood, a fierce, unquenchable necessity to be first, to win, to dominate—coupled with a limitless capacity for hard, unceasing labor in the service of his own ambition. Caro shows us the big, gangling, awkward young Lyndon—raised in one of the country’s most desperately poor and isolated areas, his education mediocre at best, his pride stung by his father’s slide into failure and financial ruin—lunging for success, moving inexorably toward that ultimate “impossible” goal that he sets for himself years before any friend or enemy suspects what it may be.

We watch him, while still at college, instinctively (and ruthlessly) creating the beginnings of the political machine that was to serve him for three decades. We see him employing his extraordinary ability to mesmerize and manipulate powerful older men, to mesmerize (and sometimes almost enslave) useful subordinates. We see him carrying out, before his thirtieth year, his first great political inspiration: tapping-and becoming the political conduit for-the money and influence of the new oil men and contractors who were to grow with him to immense power. We follow, close up, the radical fluctuations of his relationships with the formidable “Mr. Sam” Raybum (who loved him like a son and whom he betrayed) and with FDR himself. And we follow the dramas of his emotional life-the intensities and complications of his relationships with his family, his contemporaries, his girls; his wooing and winning of the shy Lady Bird; his secret love affair, over many years, with the mistress of one of his most ardent and generous supporters . . .

We see him at once unscrupulous, admirable, treacherous, devoted. And we see the country that bred him: the harshness and “nauseating loneliness” of the rural life; the tragic panorama of the Depression; the sudden glow of hope at the dawn of the Age of Roosevelt. And always, in the foreground, on the move, LBJ.

Here is Lyndon Johnson—his Texas, his Washington, his America—in a book that brings us as close as we have ever been to a true perception of political genius and the American political process.
For his biographies of Robert Moses and Lyndon Johnson, ROBERT A. CARO has twice won the Pulitzer Prize for Biography, has three times won the National Book Critics Circle Award, and has also won virtually every other major literary honor, including the National Book Award, the Gold Medal in Biography from the American Academy of Arts and Letters, and the Francis Parkman Prize, awarded by the Society of American Historians to the book that best “exemplifies the union of the historian and the artist.” In 2010 President Barack Obama awarded Caro the National Humanities Medal, stating at the time: “I think about Robert Caro and reading The Power Broker back when I was twenty-two years old and just being mesmerized, and I’m sure it helped to shape how I think about politics.” The London Sunday Times has said that Caro is “The greatest political biographer of our times.”

Caro’s first book, The Power Broker: Robert Moses and the Fall of New York, everywhere acclaimed as a modern classic, was chosen by the Modern Library as one of the hundred greatest nonfiction books of the twentieth century. It is, according to David Halberstam, “Surely the greatest book ever written about a city.” And The New York Times Book Review said: “In the future, the scholar who writes the history of American cities in the twentieth century will doubtless begin with this extraordinary effort.”

The first volume of The Years of Lyndon Johnson, The Path to Power, was cited by The Washington Post as “proof that we live in a great age of biography . . . [a book] of radiant excellence . . . Caro’s evocation of the Texas Hill Country, his elaboration of Johnson’s unsleeping ambition, his understanding of how politics actually work, are—let it be said flat out—at the summit of American historical writing.” Professor Henry F. Graff of Columbia University called the second volume, Means of Ascent, “brilliant. No review does justice to the drama of the story Caro is telling, which is nothing less than how present-day politics was born.” The London Times hailed volume three, Master of the Senate, as “a masterpiece . . . Robert Caro has written one of the truly great political biographies of the modern age.” The Passage of Power, volume four, has been called “Shakespearean . . . A breathtakingly dramatic story [told] with consummate artistry and ardor” (The New York Times) and “as absorbing as a political thriller . . . By writing the best presidential biography the country has ever seen, Caro has forever changed the way we think about, and read, American history” (NPR). On the cover of The New York Times Book Review, President Bill Clinton praised it as “Brilliant . . . Important . . . Remarkable. With this fascinating and meticulous account Robert Caro has once again done America a great service.”

“Caro has a unique place among American political biographers,” The Boston Globe said . . . “He has become, in many ways, the standard by which his fellows are measured.” And Nicholas von Hoffman wrote: “Caro has changed the art of political biography.”

Born and raised in New York City, Caro graduated from Princeton University, was later a Nieman Fellow at Harvard University, and worked for six years as an investigative reporter for Newsday. He lives in New York City with his wife, Ina, the historian and writer.
"Proof that we live in a great age of biography . . . [a book] of radiant excellence . . . Caro's evocation of the Texas Hill Country, his elaboration of Johnson's unsleeping ambition, his understanding of how politics actually works are—let it be said flat out—at the summit of American historical writing." —The Washington Post

"A monumental political saga . . . powerful and stirring. It's an overwhelming experience to read The Path to Power." —Christopher Lehmann-Haupt, The New York Times

"Epic. A brief review cannot convey the depth, range and detail of this fascinating story. Caro is a meticulous historian. Every page reflects his herculean efforts to break through the banalities and the falsehoods previously woven around the life of Lyndon Johnson . . . combines the social scientist's interest in power with the historian's concern with theme and context, the political scientist's interest in system, and the novelist's passion to reveal the inner workings of the personality and relate them to great human issues . . . A monument of interpretive biography." —Michael R. Beschloss, Chicago Sun-Times Book Week

"Not only a historical but a literary event. An epic biography . . . A sweeping, richly detailed portrait . . . vivid [with] Caro's astonishing concern for the humanity of his characters. An awesome achievement." —Peter S. Prescott, Newsweek

"Stands at the pinnacle of the biographical art." —Donald R. Morris, Houston Post

"The major biography of recent years. Brilliant . . . Magisterial . . . Caro has given us an American life of compelling fascination. A benchmark beside which other biographies will be measured for some time to come." —Alden Whitman, Los Angeles Herald Examiner

"An ineradicable likeness of an American giant. Caro has brought to life a young man so believable and unforgettable that we can hear his heartbeat and touch him. If an earlier famous Johnson had his Boswell, and Abraham Lincoln his Sandburg, LBJ has found a portraitist who similarly will owe his fame to his great subject and his certitude in taking control of it." —Henry F. Graff, Professor of History, Columbia University

"Splendid and moving. At this rate Caro's work will eventually acquire Gibbon-like dimensions, and Gibbon-like passion. . . . Caro is a phenomenon . . . an artful writer, with a remarkable power to evoke and characterize politicians, landscapes, relationships. This massive book is almost continually exciting." —Richard Eder, Los Angeles Times

"By every measure—depth of research, brilliance of conception, the seamless flow of the prose—it is a masterpiece of biography." —Dan Cryer, Newsday

"Extraordinary. A powerful, absorbing, at times awe-inspiring, and often deeply alarming story. A vivid picture of the emergence of one of this century's authentically great politicians." —Alan Brinkley, Boston Sunday Globe

"The book races at Johnson's own whirlwind pace. A tour de force that blends relentless detective work, polemical vigor and artful storytelling into the most compelling narrative of American political life since All the King's Men." —Henry Mayer, San Francisco Chronicle

"A landmark in American political biography. The definitive life of LBJ. Caro has written a Johnson biography that is richer and fuller and may well be one of the freshest and most revealing studies ever written about a major historical figure." —Steve Neal, Fort Worth Star-Telegram

"Magnificent. For understanding our recent past and the men and policies that brought the country to its present condition and aimed us toward whatever our future is to be, it's an immensely important work." —Bryan Woolley, Dallas Times Herald

"A brilliant and necessary book. There are whole and fascinating areas in Johnson's life that no one else discovered." —Merle Miller, front page, Chicago Tribune Book World

"This is a watershed book. Caro writes with sweep and passion. From the first sentence I was hooked. All other biographies of Johnson pale in comparison." —Joseph P. Lash

"Engrossing and revealing. This fascinating, immensely long and highly readable book is the fullest account we have—and are ever likely to have—of the early years of LBJ." —David Herbert Donald, front page, The New York Times Book Review

"A superb and unique biography . . . Meticulous in research, grand in scale, this is a major work that will remain a tower of its kind." —Barbara Tuchman