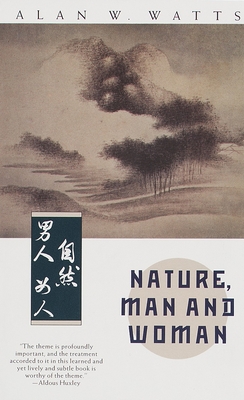 Philosopher Alan Watts ("a spiritual polymatch, the first and possibly greatest"—Deepak Chopra) reexamines humanity’s place in the natural world—and the relation between body and spirit—in the light of Chinese Taoism.

Western thought and culture have coalesced around a series of constructed ideas—that human beings stand separate from a nature that must be controlled; that the mind is somehow superior to the body; that all sexuality entails a seduction—that  in some way underlie our exploitation of the earth, our distrust of emotion, and our loneliness and reluctance to love. Here, Watts fundamentally challenges these assumptions, drawing on the precepts of Taoism to present an alternative vision of man and the universe—one in which the distinctions between self and other, spirit and matter give way to a more holistic way of seeing.

Alan W. Watts, who held both a master’s degree in theology and a doctorate of divinity, is best remembered as an interpreter of Zen Buddhism in particular, and of Indian and Chinese philosophy in general. Standing apart, however, from sectarian membership, he has earned the reputation of being one of the most original and “unrutted” philosophers of the twentieth century. Watts was the author of some twenty books on the philosophy and psychology of religion that have been published in many languages throughout the world, including the bestselling The Way of Zen. An avid lecturer, Watts appeared regularly on the radio and hosted the popular television series, Eastern Wisdom and Modern Life,in the 1960s. He died in 1973.

“Perhaps the foremost interpreter of Eastern disciplines for the contemporary West, Watts had the rare gift of ‘writing beautifully the unwritable.’”
—Los Angeles Times