Means of Ascent: The Years of Lyndon Johnson II (Paperback) 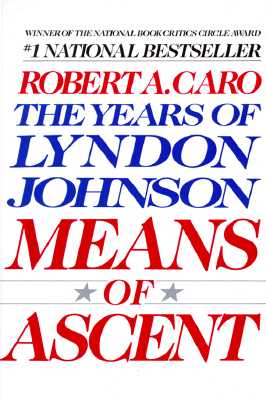 Means of Ascent: The Years of Lyndon Johnson II (Paperback)

By Robert A. Caro

This is book number 2 in the The Years of Lyndon Johnson series.

Here, Johnson’s almost mythic personality—part genius, part behemoth, at once hotly emotional and icily calculating—is seen at its most nakedly ambitious. This multifaceted book carries the President-to-be from the aftermath of his devastating defeat in his 1941 campaign for the Senate-the despair it engendered in him, and the grueling test of his spirit that followed as political doors slammed shut-through his service in World War II (and his artful embellishment of his record) to the foundation of his fortune (and the actual facts behind the myth he created about it).

The culminating drama—the explosive heart of the book—is Caro’s illumination, based on extraordinarily detailed investigation, of one of the great political mysteries of the century. Having immersed himself in Johnson’s life and world, Caro is able to reveal the true story of the fiercely contested 1948 senatorial election, for years shrouded in rumor, which Johnson was not believed capable of winning, which he “had to” win or face certain political death, and which he did win-by 87 votes, the “87 votes that changed history.”

Telling that epic story “in riveting and eye-opening detail,” Caro returns to the American consciousness a magnificent lost hero. He focuses closely not only on Johnson, whom we see harnessing every last particle of his strategic brilliance and energy, but on Johnson’s “unbeatable” opponent, the beloved former Texas Governor Coke Stevenson, who embodied in his own life the myth of the cowboy knight and was himself a legend for his unfaltering integrity. And ultimately, as the political duel between the two men quickens—carrying with it all the confrontational and moral drama of the perfect Western—Caro makes us witness to a momentous turning point in American politics: the tragic last stand of the old politics versus the new—the politics of issue versus the politics of image, mass manipulation, money and electronic dazzle.
For his biographies of Robert Moses and Lyndon Johnson, ROBERT A. CARO has twice won the Pulitzer Prize for Biography, has three times won the National Book Critics Circle Award, and has also won virtually every other major literary honor, including the National Book Award, the Gold Medal in Biography from the American Academy of Arts and Letters, and the Francis Parkman Prize, awarded by the Society of American Historians to the book that best “exemplifies the union of the historian and the artist.” In 2010 President Barack Obama awarded Caro the National Humanities Medal, stating at the time: “I think about Robert Caro and reading The Power Broker back when I was twenty-two years old and just being mesmerized, and I’m sure it helped to shape how I think about politics.” In 2016 he received the National Book Award for Lifetime Achievement. The London Sunday Times has said that Caro is “The greatest political biographer of our times.”

Caro’s first book, The Power Broker: Robert Moses and the Fall of New York, everywhere acclaimed as a modern classic, was chosen by the Modern Library as one of the hundred greatest nonfiction books of the twentieth century. It is, according to David Halberstam, “Surely the greatest book ever written about a city.” And The New York Times Book Review said: “In the future, the scholar who writes the history of American cities in the twentieth century will doubtless begin with this extraordinary effort.”

The first volume of The Years of Lyndon Johnson, The Path to Power, was cited by The Washington Post as “proof that we live in a great age of biography . . . [a book] of radiant excellence . . . Caro’s evocation of the Texas Hill Country, his elaboration of Johnson’s unsleeping ambition, his understanding of how politics actually work, are—let it be said flat out—at the summit of American historical writing.” Professor Henry F. Graff of Columbia University called the second volume, Means of Ascent, “brilliant. No review does justice to the drama of the story Caro is telling, which is nothing less than how present-day politics was born.” The London Times hailed volume three, Master of the Senate, as “a masterpiece . . . Robert Caro has written one of the truly great political biographies of the modern age.” The Passage of Power, volume four, has been called “Shakespearean . . . A breathtakingly dramatic story [told] with consummate artistry and ardor” (The New York Times) and “as absorbing as a political thriller . . . By writing the best presidential biography the country has ever seen, Caro has forever changed the way we think about, and read, American history” (NPR). On the cover of The New York Times Book Review, President Bill Clinton praised it as “Brilliant . . . Important . . . Remarkable. With this fascinating and meticulous account Robert Caro has once again done America a great service.”

“Caro has a unique place among American political biographers,” The Boston Globe said . . . “He has become, in many ways, the standard by which his fellows are measured.” And Nicholas von Hoffman wrote: “Caro has changed the art of political biography.”

Born and raised in New York City, Caro graduated from Princeton University, was later a Nieman Fellow at Harvard University, and worked for six years as an investigative reporter for Newsday. He lives in New York City with his wife, Ina, the historian and writer.
"Thrilling. Caro burns into the reader's imagination the story of the [1948 Senate] election. Never has it been told so dramatically, with breathtaking detail piled on incredible development . . . In The Path to Power, Volume I of his monumental biography, Robert A. Caro ignited a blowtorch whose bright flame illuminated Johnson's early career. In Means of Ascent he intensifies the flame to a brilliant blue point." —Christopher Lehmann-Haupt, New York Times

"Brilliant. No brief review does justice to the drama of the story Caro is telling, which is nothing less than how present-day politics was born." —Henry F. Graff, Professor of History, Columbia University

"Caro has a unique place among American political biographers. He has become, in many ways, the standard by which his fellows are measured. Caro's diligence [and] ambition are phenomenal . . . A remarkable story . . . Epic." —Mark Feeney, Boston Sunday Globe

"Immensely engrossing . . . Caro is an indefatigable investigative reporter and a skillful historian who can make the most abstract material come vibrantly to life. [He has a] marvelous ability to tell a story . . . His analysis of how power is used—to build highways and dams, to win elections, to get rich—is masterly." —Ronald Steel, The New York Times Book Review

"The most compelling study of American political power and corruption since Robert Penn Warren's All the King's Men . . . It is nothing less than a political epic, the definitive account of a watershed election, rich with all of the intrigue and drama that have become the stuff of legend. [It has] the suspense of a political thriller." —Steve Neal, Fort Worth Star Telegram

"A brilliant but disturbing book . . . A devastating study that warrants the broadest readership. He reminds us that Americans need to be vigilant in upholding their highest standards of ethics and good government." —Guy Halverson, The Chistian Science Monitor

"His research is dazzlingly exhaustive, his gripping story is enhanced by excellent writing, and his findings [seem] largely irrefutable. No one has done a better job of researching [the 1948 race] than Mr. Caro. He has produced a portrait not only of Lyndon Johnson, but also of the politics and values of mid-century America." —Philip Seib, Dallas Morning News

"Robert Caro gives us an LBJ who was human and then some, and what's enthralling is how this lucid, fascinating book keeps forcing us to confront the extreme contradictions of what (on good days) we call human nature. It's a testament to Robert Caro's skill that we find it so difficult to get a firm moral fix on Johnson. Caro is that rare biographer who seems intrigued by his subject but happily free from the urge to either heroicize, psychologize—or excoriate and punish." —Francine Prose, 7 Days

"Means of Ascent is a political biography, a detective story, a western and a character study. Above all, it is a richly textured, multilayered chronicle of a fundamental social and political change and how this change highlighted elements of Mr. Johnson's character: his powerful needs, tremendous ambition and particular genius." —Robert A. Kronley, The Atlanta Journal-Constitution

"One can trust every detail. The sagaciousness and discretion of Caro's investigations are obvious from the start. The story of that election has all the excitement of a murder mystery in which the culprit is known, but the question is whether justice will triumph. Caro tells it with the same thriller instinct as the old novelists, yet with the passion for accuracy of the most exacting detective." —Denis Wadley, Minneapolis/St. Paul Star Tribune

"A great book, and I believe the completed biography will be the great book about American politics in the twentieth century. The story of the '48 election is remarkable, unique. If it weren't a cliche, I'd say it has Tolstoyan epic grandeur." —Robert K. Massie

"Riveting . . . Explosive . . . Readers are in for a white-knuckle, hair-raising tale that could have ended in any of a dozen ways, with L.B.J. in the White House the longest shot of all. This is good history. Caro's treatment achieves poetic intensity." —Paul Gray, Time

"Extraordinary and brilliant . . . Devastatingly persuasive . . . Caro's prodigious research, and his discovery of original sources ignored by other biographers, proves beyond doubt that much of what Johnson said about these years was false . . . The spadework combined with Caro's passion makes for drama more riveting than any novel." —Mark A. Gamin, Cleveland Plain Dealer

"Caro is the premier biographer of our time." —Bernard D. Nossiter, The Progressive