Make It Till You Make It: 40 Myths and Truths About Creating (Paperback) 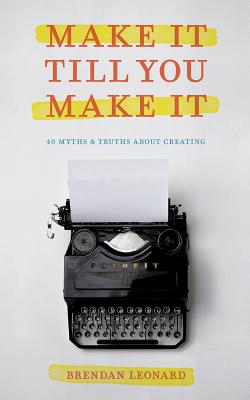 Make It Till You Make It: 40 Myths and Truths About Creating (Paperback)


We can usually get this book in 3 to 7 days, except during a pandemic. We are doing our best
(This book cannot be returned, even for store credit.)
A concise kick in the ass to start doing the creative thing you dream about but don't feel like you have the time/skills/know-how to pull off. Nobody gets tapped with a magic wand and suddenly has the ability to produce art, music, photos, films, or writing-they just do it. And you probably should too. Make It Till You Make It breaks down 40 myths and truths about the pursuit of creative expression, whether you want to make $0 a year doing your thing or $100,000 a year.
Brendan Leonard's writing has appeared in National Geographic Adventure, CNN.com, Outside, Men's Journal, High Country News, and dozens of other publications. His award-winning short films have toured internationally with the Banff Mountain Film Festival and Mountainfilm.